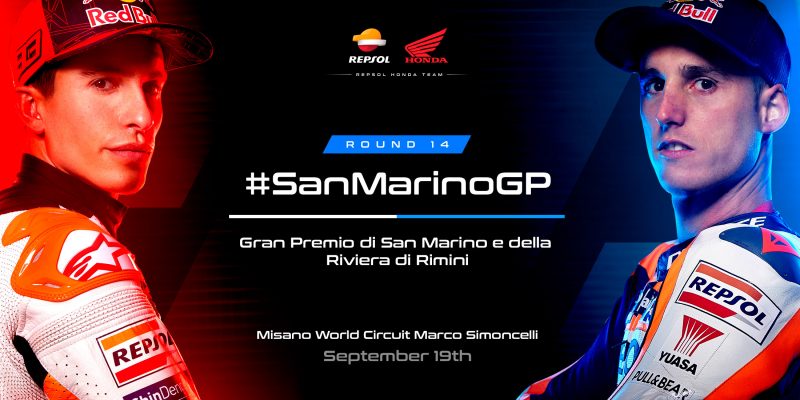 After an exhilarating Aragon GP, the Repsol Honda Team are Misano bound as the MotoGP World Championship enters its final five races of 2021.

The seas-side circuit of Misano World Circuit Marco Simoncelli has been a permanent fixture on the World Championship calendar since 2007 after layout modifications and has hosted some titanic battles, including Marc Marquez and Fabio Quartararo’s fight for victory in 2019. At 4.2 kilometres long, the track offers a variety of challenges for both riders and machine – a tight opening sector with low-speed corners opens up to a fast and flowing second half of the lap, the sequence of Turns 11 through 13 an impressive sight on television and in person.

Marc Marquez arrives at the San Marino Grand Prix with added fire after an incredible 23-lap battle with Francesco Bagnaia for victory in Aragon. The Repsol Honda Team rider has won three races from his seven appearances in San Marino and only twice finished off the podium. For the #93, Misano in 2021 offers a chance to confirm his and the team’s feelings from Aragon and continue to build their consistency after flashes of brilliance have been dampened by falls earlier in the year.

For Pol Espargaro, this latest GP weekend offers an opportunity to continue to deepen his understanding of the Honda RC213V. A difficult Sunday in Aragon’s hotter race-day conditions reconfirmed that Espargaro still has work to do when temperatures rise and Misano forecast suggest the #44 will have an opportunity to improve his feeling in these conditions. In 2020, Espargaro ended on the podium in Misano, a circuit at which he has only once finished outside the top ten since joining the premier class in 2014.

The MotoGP field will also gain Stefan Bradl this weekend who will wild card with the HRC Test Team on a fifth Honda RC213V.

“After a great race and a great battle like in Aragon, you arrive at the next race with a bit of extra motivation. Let’s see what this weekend will bring, in the past we have had some very good races here but it’s a demanding circuit. Also after the race we have two days of testing which will be very important for us and for HRC as we keep working to improve. It’s going to be a busy week on my Honda.”

“The forecast in Misano is looking hot so we know that we will have to work to improve out feeling to be closer to our Silverstone performance than our performance in Aragon. We have been making improvements in this area, but we need to keep on working to show our potential and the potential of the bike. I am also looking forward to the test, two days of just riding will be a big help because right now one of our biggest problems is the lack of testing we have had this year. Let’s make the most of it.”