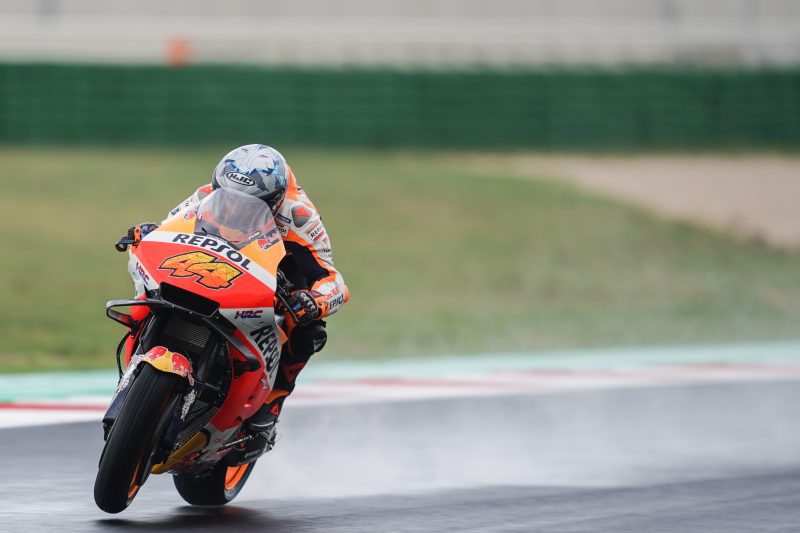 A strong sixth place opened the San Marino GP weekend for Pol Espargaro, teammate Marc Marquez less than a tenth behind in ninth.

It was far from idyllic beach conditions on the opening day of MotoGP practice at the San Marino GP as semi-regular rain showers hit the paddock during both MotoGP practice sessions. Free Practice 1 started with dry running and allowed riders to at least get a taste of the Misano World Circuit Marco Simoncelli in better conditions. All of the best times of the day came from these first half of FP1 when the track was dry.

From the handful of dry minutes at the start of the day, Pol Espargaro managed to grab top-Honda honours and set what would be the sixth fastest time of the day. His 1’33.019 saw him end 0.353s shy of Viñales’ best time of the day and Espargaro was able to show well in the wet second half of the session as well. In the dry, Espargaro is feeling confident with the pace he and the team found in FP1. With conditions unchanged and still wet in Free Practice 2, Espargaro wasted no time in heading out on track to continue learning the Honda RC213V in all conditions, making improvements as the afternoon went.

In typical modern-day MotoGP fashion, there was little to choose between the top ten and Marc Marquez ended the day ninth fastest but within half a second of the top time in the dry. Marquez made the most of all available track time and returned to the circuit at the end of Free Practice 1 as the rain fell to understand the conditions. In Free Practice 2, the rain returned and with the entire session held in the wet, Marquez was able to improve his feeling and challenge the futon runners. Setting the fifth fastest time of FP2, the #93 still feels there is something missing to close the gap to the front in the wet.

Wildcard Stefan Bradl was again impressive on his return to the Grand Prix paddock, the German setting the eighth fastest time of the day. His 1’33.047 was only 0.023s off the time set by MotoGP World Championship leader Fabio Quartararo.

Forecasts remain mixed for Saturday action as well, action set to begin at 09:55 Local Time with Free Practice 3. Should it remain dry, the session will offer a last chance for the Repsol Honda Team pair to defend their position inside the combined top-ten.

“It has been a good day and I’m happy with our dry pace. In the afternoon our feeling in the wet improved throughout the session and we understood more. I felt good and was fast in the dry, so it’s quite a good start to the weekend. The weather still looks a little unpredictable for the weekend so it is good to try the bike in both conditions. Already we have been able to start to build an idea of what the plan will be on Sunday, so this is positive.”

“At the moment our feeling is not bad in the wet and in the dry, it’s not the same as in Aragon and we’re back to what has been out ‘standard’ level this year, more or less. In the dry I could feel some limitations in a couple of corners, but we have time to try and work on the setup to be a bit faster there. Apart from this, let’s see if we can improve tomorrow. Then in the wet, normally we are fast there but we are still missing something. All the Honda riders looked like they struggled a bit so we need to explore this. There’s a few things still to try tomorrow, so let’s see what the weather is like.” 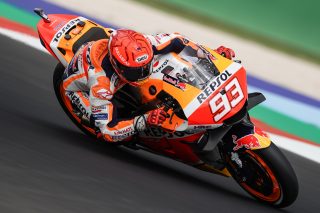 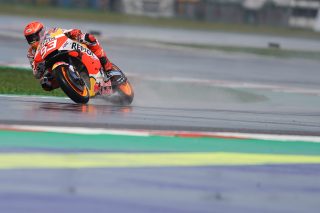 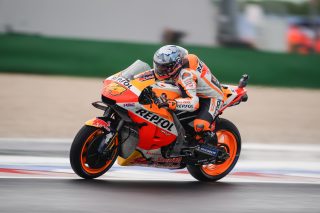 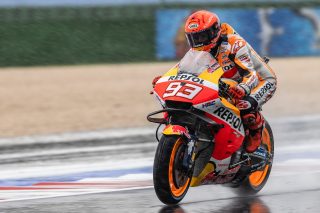 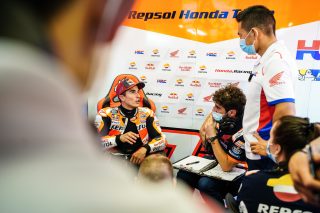 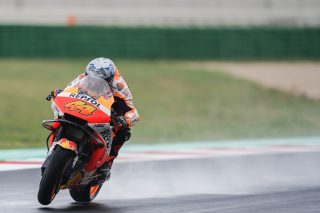 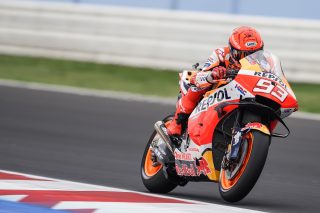 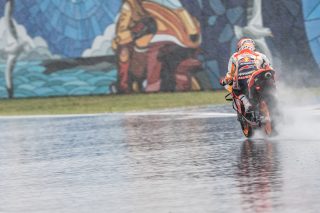