The Repsol Honda Team has returned to Europe, to Southern Spain, for Round 4 of the MotoGP Championship, fresh from Marc Marquez’s maiden win of the season in Austin, with which he equalled Mick Doohan (Mugello, 1993-1998) and Casey Stoner (Phillip Island, 2007-2012) with six consecutive premier-class victories at the same circuit*. The amazing result allowed Marc to move up the order to second, just one point off the top of the World Championship classification.

Dani made his MotoGP debut at Jerez in 2006 with a brilliant second-place finish, and last year he reached an historic landmark in winning the 3,000th Grand Prix race ever held and taking the Repsol Honda Team’s 100th victory in the MotoGP class. He will try to make the best of his good feeling with the track to overcome the difficulties of recovering from surgery to his right wrist.

Marc and Dani have stood together on the podium at the Andalusian track on three occasions, in 2013, 2014, and last year.

The Repsol Honda Team has completed a positive one-day private test in Jerez – which has been fully resurfaced last summer, on 26 March.

The circuit will be renamed in honor of Ángel Nieto in a special ceremony on Thursday, May 3.

Along with the recent Grand Prix of the Americas, the Sunday’s Spanish Grand Prix will be the second event this season to be shortened in length compared to previous years. This time the race will change from 27 laps to 25.

“We arrive in Spain following a great weekend and a great result in Texas, but now a new phase begins in Europe, where we’ll see the level of every team and rider. Here, the circuits are generally different and more ‘traditional,’ starting with Jerez, which is a tighter, slower, and more difficult track than the ones like Austin. We had a good setup there, and now it will be important to also find a good base for circuits like Jerez. We had a good test there at the end of March, and we’ll approach it with a positive mentality. Racing in front of my home crowd and my fan club will of course add to the good feeling and atmosphere. We’ll keep working hard and focusing on consistency, which is a crucial point for the title chase; I think Dovi will be a great rival, as he was last year. Anyway, this year I feel really good on the bike: In Qatar, Argentina, and Austin, the confidence was always there, and that’s the most important thing. We’re just one point behind in the championship, so we must continue this way.”

“I’m looking forward to the next race, in Jerez. Finally we get to Europe. I’ve had one more week for my wrist to recover, and hopefully that will help with my riding. It was important to get some points in the last race, and once again we’ll try our best at Jerez. Hopefully on Friday there will be less pain in my hand, and the strength will be good enough to ride in the best possible conditions at a track that I like very much, surrounded by all my fans.” 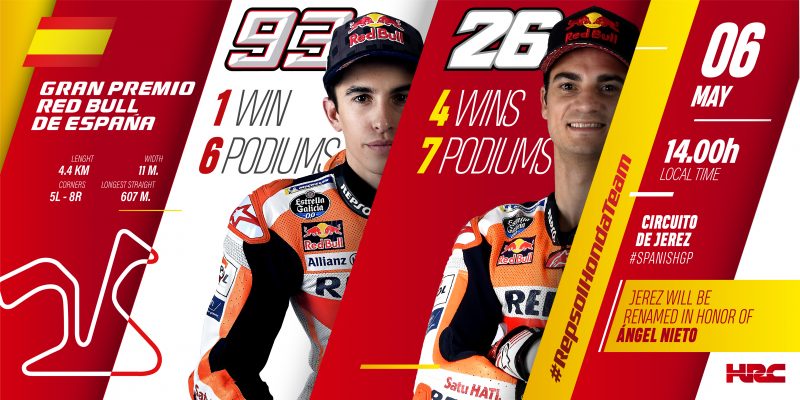