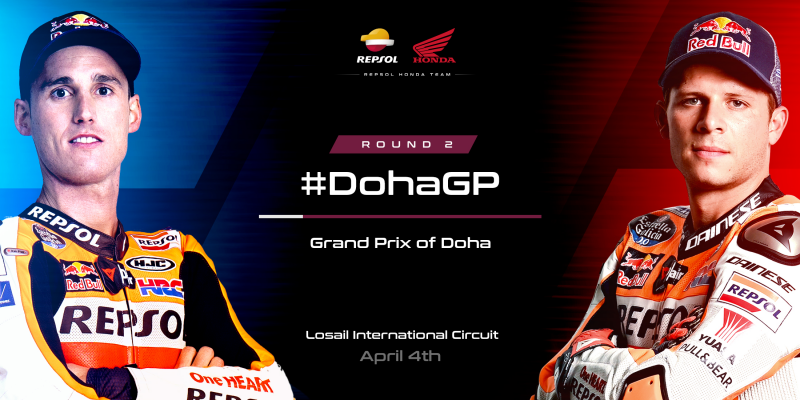 With a positive first race weekend of the year done, Pol Espargaro and Stefan Bradl return to the Losail International Circuit looking for more.

It’s a case of déjà vu in the Repsol Honda Team garage as preparations begin for round two of the 2021 World Championship. The 5.4-kilometre-long Losail International Circuit will once again host a Grand Prix under its floodlights, the Grand Prix of Doha. After five days of testing and a race already at the circuit, it will be a weekend of fine tuning and looking for maximum performance. Back-to-back events at the same circuit in 2020 showed how fierce the competition can be during the second race.

Completing his first Grand Prix on the Honda RC213V has earned Pol Espargaro a wealth of knowledge that he is keen to put to use this weekend in order to improve further. Contact during the early laps disrupted Espargaro’s race but his overall pace was extremely encouraging for the Repsol Honda Team. Forecasts are predicting very similar conditions for the upcoming race, giving Espargaro a great opportunity to work on the areas of improvement he found during his first outing.

Stefan Bradl will once again be the team-mate of Espargaro as Marc Marquez continues to work on returning to full fitness and the MotoGP grid. An overall consistent weekend yielded an 11th place finish for the German test rider who is confident he could have fought for the top ten with a less conservative approach. Continuing to push on and fight into the top ten is Bradl’s objective for the weekend with a particular focus on Qualifying.

After a brief period of rest, the MotoGP grid will be back on track on Friday, April 02 at 15:40 Local Time. Sunday’s race will again start at 20:00 Local Time on Sunday, April 04.

“We get ready to go again. Last week we had a positive start, but this is not the position we should be fighting for. The goal is to make another step this week and now having done a race, I am feeling much more prepared and have a clearer idea of what to expect. During the race we were able to see our strengths and our weaknesses. We still need to work on Qualifying to be further ahead on the grid so we can have a better chance of a clean first lap. The journey has just started and now it’s time to pick up the pace.”

“Another week in Qatar, after last year it feels quite normal to have two races at the same circuit. Certainly, Qualifying will be one major area to focus on alongside the normal jobs of a race weekend. If we can put together a solid weekend, the top ten is within our reach. Now that everyone has so much track time here, it will not be easy but we know our potential. I don’t want to leave anything on the table for this second race.”