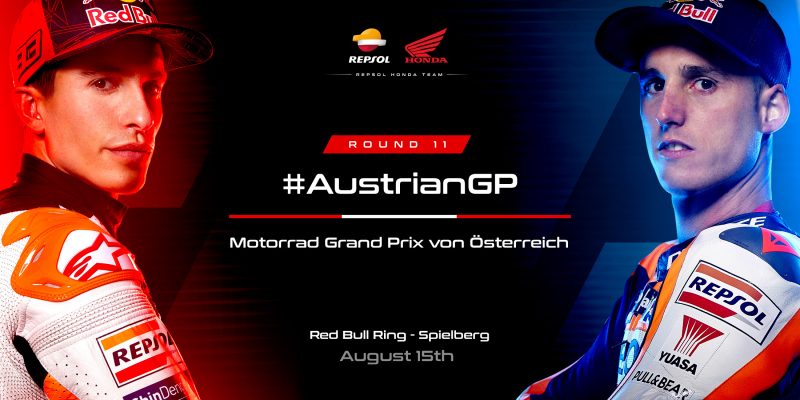 The Styrian GP had the pieces of a strong weekend, but a disrupted Sunday meant the Repsol Honda Team were left unsatisfied, a second weekend in Austria now presents a chance to put those back pieces together.

The MotoGP World Championship is back at the Red Bull Ring in Austria for Round 11 of the season with the second double-header of the year. Until Sunday afternoon, the Styrian Grand Prix had been progressing well for the Repsol Honda Team with both Marc Marquez and Pol Espargaro showing speed in the wet and the dry, this fact is motivating the team as they prepare to do it all again at the Austrian GP.

Marc Marquez returns to the circuit knowing that he had certainly shown the speed to battle for top positions and will be aiming to further refine the setup of his Honda RC213V to again challenge the front runners. The first race start saw Marquez battling inside the top five and looking confident, it’s this speed that Marquez and his team are aiming to have again on Sunday. Marquez currently sits tenth in the World Championship with 58 points.

Pol Espargaro’s main objective for the weekend is to solve the lack of traction he experienced during the first race. Solid race pace and speed in the wet during practice demonstrated that the #44 has more to offer than his results last Sunday showed. With 41 points, Espargaro is currently 14th overall in the championship standings.

The Repsol Honda Team will be back on track at 09:55 Local Time on Friday for Free Practice 1.

“We are back again in Austria and it’s the first time I will be racing at the same circuit two weekends in a row, so this will be interesting. Honestly speaking I don’t think it will change too much but we start from a very good base. Last weekend was good, apart from the restart on Sunday. I am confident we can do another good weekend.”

“For this second weekend we need to improve. It was a really difficult weekend last time so we need to try something new to improve our situation because it’s not what should happen when you wear these colours. I know that if we can improve the rear grip that we can fight and keep improving. The important thing now is to keep focused and keep working.”