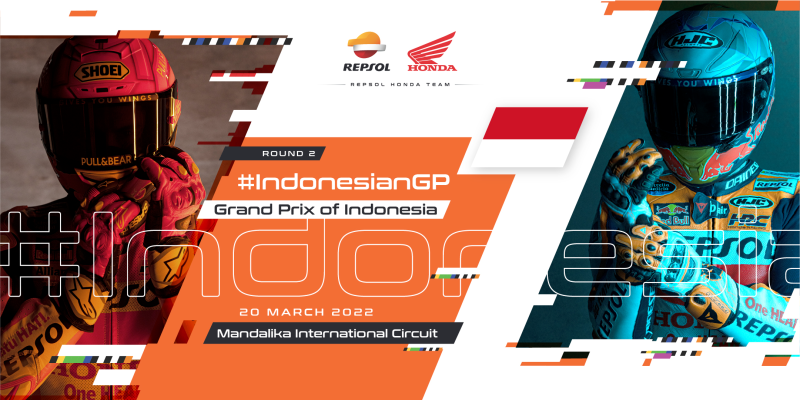 Pol Espargaro and Marc Marquez ready to put on a spectacle for Indonesia’s MotoGP fans as they prepare for Grand Prix racing’s return after 25 years.

Indonesia holds fond memories for the Repsol Honda Team, Mick Doohan and Tadayuki Okada won the two previous races held in Sentul in 1996 and 1997. The 1997 edition, the last race in Indonesia, saw the Repsol Honda Team lock out the podium with Okada winning ahead of teammates Doohan and Alex Criville. It’s a welcome return to Indonesia, especially with the incredible support always shown by the country’s fans.

The Repsol Honda Team arrive with boosted confidence after a strong start to the year under Qatar’s floodlights. Pol Espargaro led the team home in third with Marc Marquez rounding out the night with a productive fifth place, the combined results putting the Repsol Honda Team at the top of the Teams’ Championship. More consistent results are the aim for this weekend in Lombok as both Espargaro and Marquez start putting together their respective seasons.

Espargaro enjoyed his best start to a MotoGP season of his career, leading the opening race for 17 laps on his way to third place. Having topped the final MotoGP pre-season test at the Mandalika Circuit, the #44 arrives with a good base. Resurfacing work after the test will present Espargaro and the rest of the grid with a new aspect of the track to master and assessing these changes will be first and foremost in the weekend’s plan.

Marquez’s results during the Mandalika Test also offer early positive indications for him and his side of the Repsol Honda Team garage. Showing the potential of the new Honda RC213V with an impressive front-row performance in Qatar, Marquez is eager to keep the improvements coming as his feeling with the new machine grows. Brand new MotoGP circuits have been somewhat of a speciality for the #93 in the past, winning his first premier class Grand Prix in Austin when the US tack debuted on the calendar. He also won the inaugural Thai GP in 2018 and the first Argentinian round held at Termas in 2014.

Weather will no doubt be a major factor over the weekend as showers have been occurring daily in the lead up to the race. The MotoGP race will begin at 15:00 Local Time on Sunday, March 20.

“I am really looking forward to Mandalika, the fans were already incredible there during the test and I can only imagine what it will be like for the race. We’re coming in a good moment, a strong race in Qatar and we had a good test before in Mandalika, but a lot has changed since then. They’ve resurfaced the track which should be a big help, but we have to see what it’s like when we arrive. The plan is to continue working how we did during Qatar and in the test and to keeping unlocking our full potential.”

“We made improvements over the weekend in Qatar and it’s clear to see there is a lot of potential there. I’m really happy to return to Mandalika, it is great to be able to see all our Indonesian fans and to finally put on a great show for them after so many years. I hope our fans enjoy it and we can put together a good weekend for them to celebrate. Another weekend presents another chance to understand the bike more and get closer again to fighting at the front, it’s early days and we keep on pushing.”