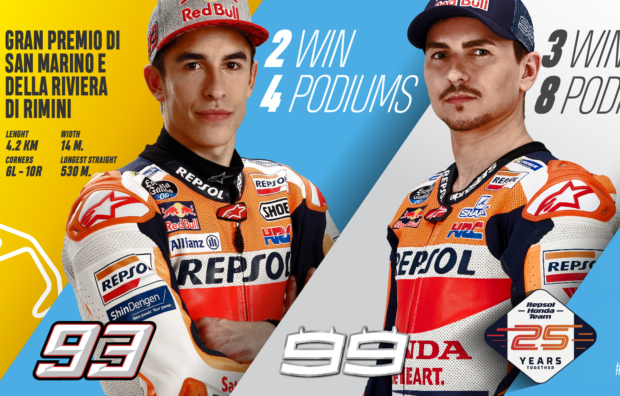 A successful test followed by a short break has the Repsol Honda Team pairing of Marc Marquez and Jorge Lorenzo feeling refreshed and confident for the San Marino GP.

The 4.2 kilometre long Misano World Circuit Marco Simoncelli will welcome the MotoGP World Championship for round 13, September 13 – 15. The combination of tight opening corners and a fast-and-flowing second half of the lap makes for an interesting setup challenge for the riders and teams.

Marc Marquez arrives on the Adriatic coast with a healthy 78-point lead in the MotoGP World Championship and a productive test at the Misano circuit under his belt. The test will allow the World Championship leader and his Repsol Honda Team to start the weekend with their best foot forward on Friday. With two previous premier class wins at the track, Marquez is aiming to once again fight for victory as the closing stages of the 2019 season begin and to keep his record of top-two race finishes in 2019 alive.

Time between races has allowed Jorge Lorenzo’s physical condition to improve further. After a valiant ride to 14th at the British GP, Lorenzo and the team elected to end his test in Misano early to allow him to maximize his recovery time, but were still able to collect important data ahead of this weekend’s race. With three wins, four premier class pole positions and the outright circuit record, Lorenzo’s past form shows great potential for the upcoming San Marino GP.

“We arrive at Misano in a good way after some strong races for us and after a productive test. During the test we were able to try many things and get a good understanding of how the Honda is working around Misano this season. I am confident for the weekend but we will face strong opposition as always, especially after the test. Our approach doesn’t change, we have our own plan and we will work towards it and see what happens on Sunday.”

“Each day I am feeling stronger and able to train harder than the previous day and the time between races has helped. I am looking forward to getting back on the bike and seeing how I feel physically on the RC213V. Despite not completing the full test, we were able to find some good information to be able to start the weekend well. In the past Misano has been a good circuit for me so I am hopeful that this weekend we can continue to close the gap.” 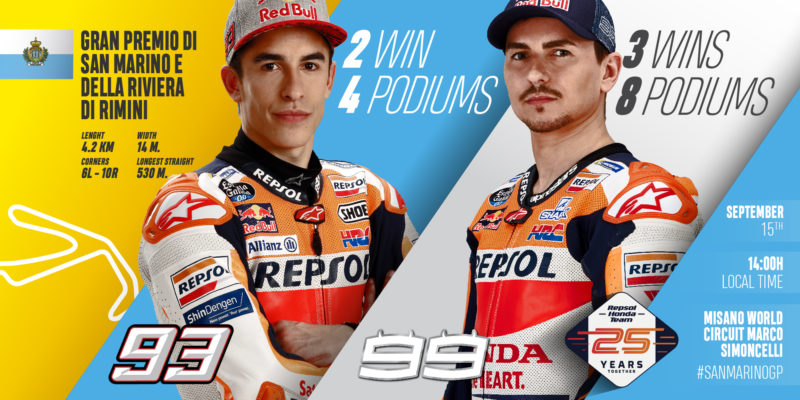