Today in the Grand Prix of Spain in front of 111,259 spectators, Repsol Honda’s Dani Pedrosa completed a perfect race to take his first victory of the 2013 season. Teammate Marc Marquez enjoyed a fantastic battle with Jorge Lorenzo, passing him in the final corner to take a thrilling second place.

After tracing Lorenzo, who led from pole, in the early laps, Dani made his move on lap six and never looked back, opening up a 2.4 second lead by the end of the race. With this victory, Dani continues his incredible run here in Jerez, finishing on the podium in all eight starts in the MotoGP class. Jerez continues to be the most successful circuit for Spanish riders for premier-class victories, with a total of nine; Alberto Puig in 1995, Alex Criville in 1997, ‘98, ‘99, Sete Gibernau in 2004, Jorge Lorenzo in 2010 & 2011 and Dani in 2008 and 2013.

It was an eventful race for Marc who had an early battle with Valentino Rossi but passed him and then stuck with Lorenzo for the majority of the race, trying to find a way to pass his countryman. In the final lap, on the final turn, Lorenzo didn’t fully close the door and it was all Marc needed. The bikes touched but Marc was able to keep his line and finished ahead of Lorenzo. Marc is now the youngest rider to finish on the podium at three successive premier-class races, after his 3rd place in Qatar and victory in Austin.

Marc now leads the 2013 World Championship standings on 61 points, with Dani second on 58 points. Collecting the trophy for Honda was Mr. Manabu Nishimae, COO for Regional Operations (Europe, Middle and Near East and Africa), President and Director of Honda Motor Europe Ltd.

“It was a beautiful race. I was able to ride the bike well, even though it was difficult because the tyres were really on the limit. I couldn’t push too hard because of that, so I had to ride carefully. I was able to maintain a good advantage throughout the race and collect this win at home as a result. It was fantastic, especially seeing all the fans in the stands; this year we’ve had a lot of people come to watch this Grand Prix. I also want to say ‘Happy Mothers Day’ to my mum and thanks to all my team; it’s been a great day!”

“It was a very good race. I gave 100 percent from the first lap through to the last. At some points in the race I felt better than at others, but I never gave up. I tried to stick as close as possible to Lorenzo, although it was very difficult. I couldn’t quite close the gap, but I didn’t let him get away either. It was a very hard race, because if you get one or two seconds difference between you, you relax a bit. I didn’t relax though, and I am very happy. I think that, above all, the end of the race was really good for the fans. I want to apologise to Jorge, because it was a racing incident – a last lap move that happens when you are on the limit. The most important thing is that we both finished the race, and I hope that that’s the end of it.” 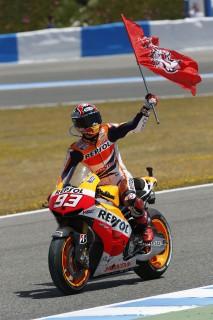 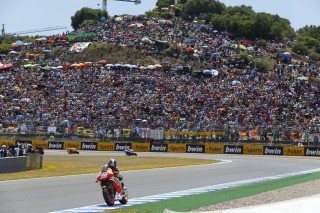 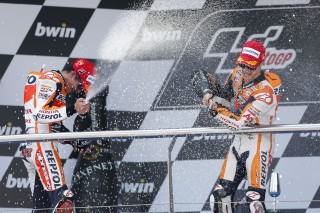 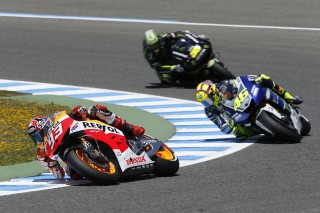 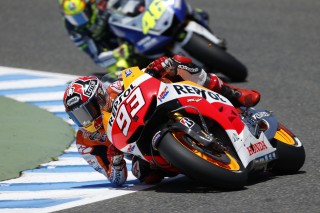