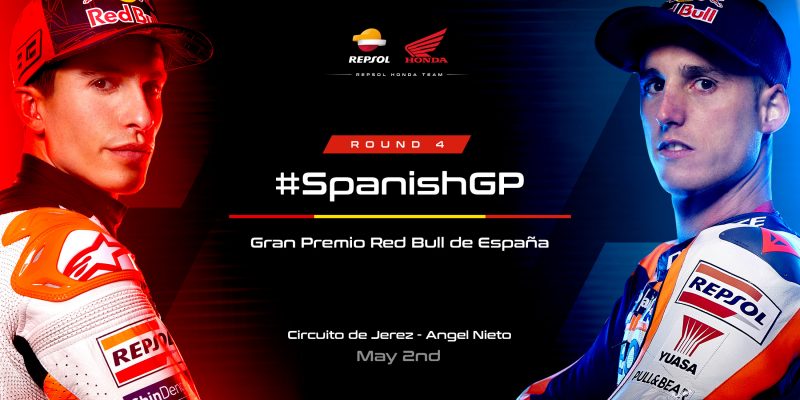 After an emotional return to MotoGP in Portimao, Marc Marquez’s rehabilitation continues in Jerez as Pol Espargaro aims to make amends for the previous round.

Heading to the iconic Jerez de la Frontera for the Gran Premio Red Bull de España, the MotoGP World Championship is primed for another exciting weekend. The Repsol Honda Team will again be operating at full capacity as Marc Marquez and Pol Espargaro line up together aboard the RC213V. This weekend there will be a fifth Honda on the grid as Stefan Bradl returns to the World Championship as a wildcard.

Marc Marquez put in a hero’s effort to race to seventh in Portugal on his return to racing after missing the majority of the 2020 season. In Portimao Marquez showed he has lost none of his aggressive style, sliding his Honda, making his characteristic saves and even fighting for the lead of the race in the early laps. The eight-time World Champion is prepared for another demanding round as his physical condition continues to improve. While the previously broken right humerus had no problems in the previous outing, Marquez is continuing to work in the gym to improve his overall race fitness. Marquez has scored a podium on each occasion he has finished the Spanish GP in the premier class including three wins.

Having put the cruel stroke of fate that ended his Portugal GP early behind him, Pol Espargaro is approaching the Spanish GP with his trademark focus and optimism. Now set to ride the RC213V at a third different circuit, the Granollers native is eagerly looking forward to riding his new machine at a well-known circuit. Espargaro’s goals for the weekend remain the same; make improvements throughout the weekend and fight on Saturday to earn a better grid position than in previous races.

Premier class action begins at the Circuito de Jerez – Angel Nieto on Friday at 09:55 Local Time with Free Practice 1 for MotoGP. Sunday’s schedule returns to the traditional format with the MotoGP race following the Moto2 race at 14:00 Local Time.

“Now we are back into the rhythm of racing, after a productive week we are coming back to the track. I have continued to work through my recovery programme to make sure my physical condition is improving and following the advice of the doctors I have not ridden a motorcycle since Portugal. So, of course I am excited to get back on the bike! We approach Jerez the same way as Portimao; we are here to keep improving step by step and do the best job that we can. My recovery is continuing, and the important thing is that we keep improving our consistency. Let’s put on a great weekend for the fans who can’t attend.”

“Jerez is a circuit we all know very well but it will be my first time there on the Honda. Stefan has been doing a lot of riding there with the Test Team, so we will have some good data to look at before the weekend and the work begins. Improving our Saturday performance remains one of my major goals, if we get this right then we can show our true potential on Sunday. We were unlucky in Portugal, now we reset and come at this new weekend ready to deliver on what we know our potential is. It’s a shame not to have all the fans track-side, racing in Spain is always special and especially in Jerez there’s an incredible atmosphere normally.”