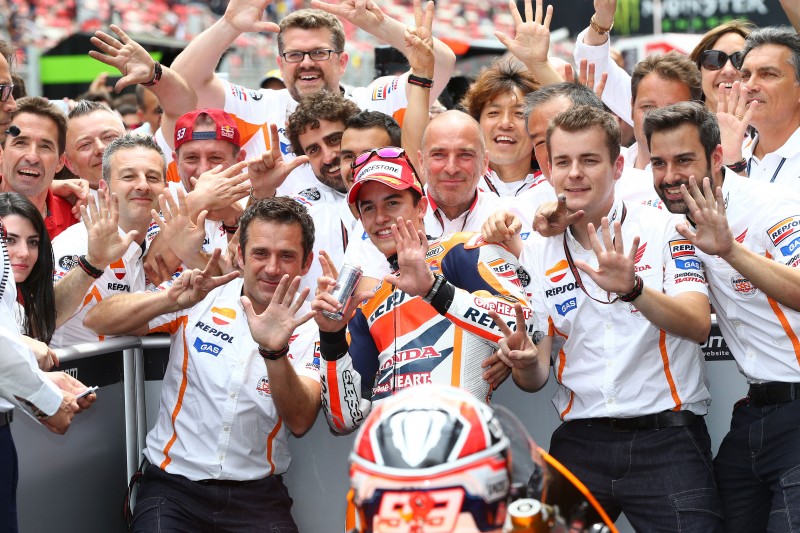 Repsol Honda’s Marc Marquez has continued his perfect season with his seventh consecutive win, marking Honda’s 100th victory since the introduction of the four-stroke MotoGP era, and has become just the second rider after Valentino Rossi to win seven successive MotoGP races since the category was introduced at the start of 2002. Teammate Dani Pedrosa battled to the end with Marc, but lost out after a last lap attempt and finished in third.

It was an incredible race which started at a very high tempo in front of 92,845 spectators. Dani and Marc, first and third on the grid respectively, fell to third and fourth on the first lap before Marc passed Dani into third on lap two, setting a new record race lap of 1’42.182 (beating Dani’s time of 1’42.358 from 2008). Valentino took the lead from Jorge Lorenzo on lap four and on lap six Marc and Jorge had a nice battle passing each other a few times, before Marc made it stick. Coming into turn one on lap seven Dani passed Jorge for third place and began to chase down his teammate Marc and on lap nine the two Repsol Honda riders passed each other twice, but Marc was able to hold onto second place.

Marc caught up with race leader Valentino and ran wide attempting a pass, briefly dropping down to third but the regaining second place immediately. Five laps later, on lap nineteen, Marc passed Valentino but saw a yellow flag, so he wanted to give back the position immediately. Dani also passed but realised something was strange so he followed Marc’s actions and conceded the position back, he kept close to the two riders battling and on lap twenty two he passed Valentino and chased down Marc.

On the final lap, both Repsol Honda riders displayed a masterpiece of riding as they passed each other four times before Dani made a small mistake and slightly touched Marc. He was forced to sit the bike up and ran slightly wide, allowing Valentino to pass him and claim second place as Marc won the race setting a new fastest race time with 42’56.914.

With his victory here in Catalunya, Marc has also become the youngest ever rider (21 years and 118 days) to win seven successive races in the premier class, taking the record from Valentino Rossi (23 years and 155 days) also riding a Honda. This victory marks the first time two brothers have won on the same day in the World Championship after Alex Marquez rode his Honda to victory in the Moto3 race earlier this morning.

Marc continues to extend his lead in the Rider’s Championship with 175 points with Dani in third on 112. Honda lead the Constructor’s Championship by 48 points, with a total of 175, and the Repsol Honda Team lead the Team’s Championship by 92 points, on 287 points. The next race will take place in Assen on the 28th June.

“I am delighted with this win because this is a track which I have always found difficult. You could see how tough it is for me this weekend: I missed out on pole for the first time this season and had my first crash of the year. The race was very hard with a battle against Dani, Jorge and Valentino. I think that the last few corners were especially spectacular, with the moves by Valentino and Dani. I am very happy about taking another 25 points and also to win on the same day as my brother at home in front of all our fans! It’s something very special.”

"It was a very good, hard-fought race because we had four riders up at the front for most of the race. There was a lot of overtaking and it was very intense, because we were going so fast. Overall I am very satisfied, even though the end result was not the best; we fought hard and I felt much better physically. I'll take the positives from this race: I got my wish of being up at the front, both in practice and on the early laps of the race, and I ended the race fighting with Marc for the victory!” 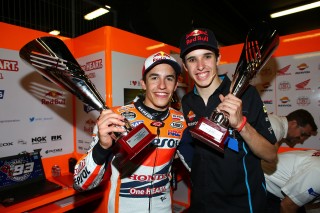 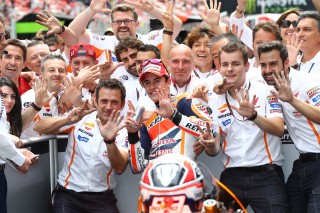 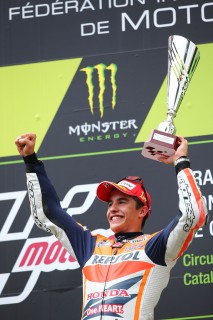 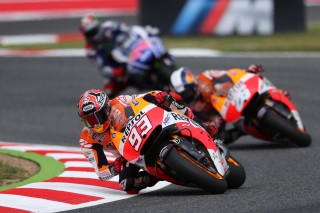