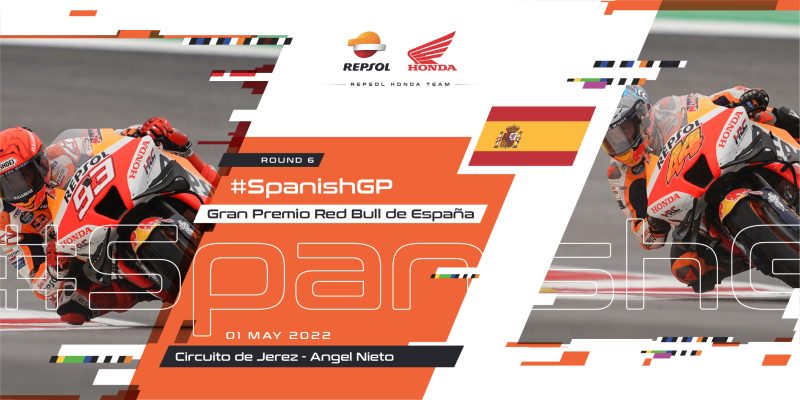 The Repsol Honda Team arrive in Spain with an appetite to improve after a mixed start to the season, Marc Marquez and Pol Espargaro ready to perform in front of their home fans.

Another set of back-to-back races brings the MotoGP World Championship straight from Portugal down to Jerez de la Frontera in the south of Spain for round six of the 2022 season. The Circuito de Jerez – Angelo Nieto, which first hosted a GP in 1987, has become one of the most familiar circuits on the calendar. The classic Spanish circuit is 4.4-kilometers long and features five left and eight right corners.

Marc Marquez has an incredible record at the track in the premier class, finishing off the podium on just a single occasion, when he returned to competition in 2021, and has won the Gran Premio Red Bull de España a total of three times with four additional podium finishes. After a mixed start to the year, Marquez is hoping the familiarity of the Jerez circuit will give himself and the Repsol Honda Team the opportunity to fully understand the situation and continue to make improvements and progress with the 2022 Honda RC213V.

Like his teammate, Pol Espargaro has been able to achieve strong historic results at the Spanish Grand Prix with five top-ten finishes in Jerez in the premier class. Having started the season with incredible form, a number of problems and setbacks have plagued the #44 as he has worked to show the potential of himself and the Honda. Despite the setbacks, Espargaro remains as motivated as ever to work to regain his and Honda’s speed from the pre-season and arrives in Spain hungry to perform.

Stefan Bradl will line up on a fifth Honda RC213V in Jerez as the Honda HRC Test Rider makes his first wildcard appearance of the year.

“Of course I am happy to arrive in Jerez and see the Spanish fans. It’s a very special circuit to race at, not just because of the history but also because of the atmosphere on race day – after some difficult years I hope that all the fans can come and enjoy. For us it will be an important weekend to keep improving and getting closer to the front. Portimao was a complicated weekend for us so I hope that everything in Jerez will be more straightforward, and we can work well throughout the whole weekend to fight on Sunday.”

“The best thing to do after a hard race is to go racing again, so I am happy that we arrive straight away in Jerez. We need to understand what our situation is in Jerez and work to overcome it, to show the speed we had before the start of the year. It’s great to come back to Spain and hopefully on Sunday we will be racing in front of crowds like before, because this is something that makes Jerez really special. Let’s work hard this weekend and show what we can do, I have full faith in my team and HRC to unlock our potential.”