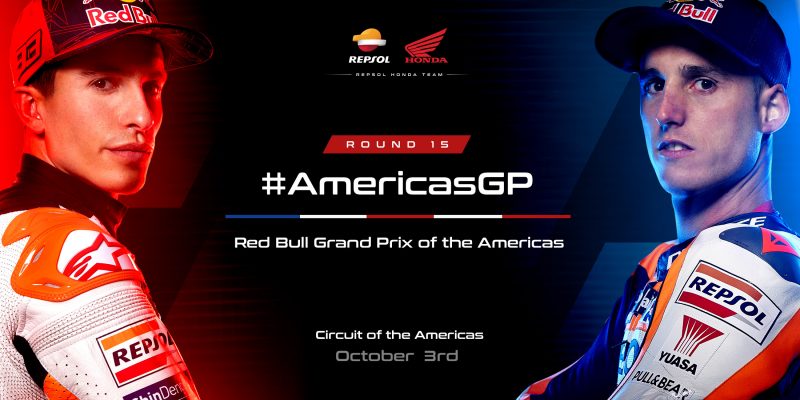 The MotoGP World Championship heads for the second flyaway of the year as the championship returns to the United States of America, Marc Marquez and Pol Espargaro excited to see what the RC213V can do in Austin and reunite with US fans.

After an intense two weeks with back-to-back races and a two-day test, the Repsol Honda Team are out on the road again and heading stateside. The unique Circuit of the Americas in Austin, Texas will return to hosting the Grand Prix of the Americas after a hiatus in 2020 due to the global pandemic. First added to the calendar in 2013, the Texan track saw Marc Marquez take six straight pole positions and victories between the 2013 and 2018.

Marc Marquez has missed victory just once at 5.5km-long circuit when he fell while leading in 2019. Although the eight-time World Champion is aware that he arrives in a very different situation in 2021, his aim is to make the most of the weekend and continue the recent run of form. With second in Aragon and a fighting fourth in Misano, the #93 arrives in some of his best form since returning from injury. Marquez has taken pole position on each of the previous seven visits that MotoGP has paid to the Circuit of the Americas and holds the outright lap record of 2’02.135 set in 2015.

After a busy and productive Misano Test, Pol Espargaro is also looking forward to being reunited with his Honda RC213V and seeing what’s possible around the Texan circuit’s 20 corners. Espargaro’s most recent visit to COTA yielded an eighth place finish back in 2019 and the #44 has only once finished outside of the top ten at the track. Like his teammate, Espargaro has been making steady progress since his pole position in Silverstone and is out to make a strong impression in the last four races of 2021.

Action begins in the US at 09:55 Local Time on Friday, October 01 at the Red Bull Grand Prix of the Americas.

“I am looking forward to Austin and we’re arriving there after two good races, in Aragon and then in Misano. It’s a layout that I like and in the past we have had a lot of success but this year is a little bit different with our situation arriving there. Like always, it’s going to be important to build over the weekend and see where we line up on Sunday morning. No matter what it will be great to return because it’s a round I always enjoy a lot.”

“After a good test I am excited to head to Austin, it’s a fun track to ride and it will be great to see some more MotoGP fans outside of Europe. We found a few things during testing in Misano and Austin will be a good place to try them because it’s a circuit with a lot of variety. I’ve had a few top tens there in the past so hopefully we can build on that base this weekend.”