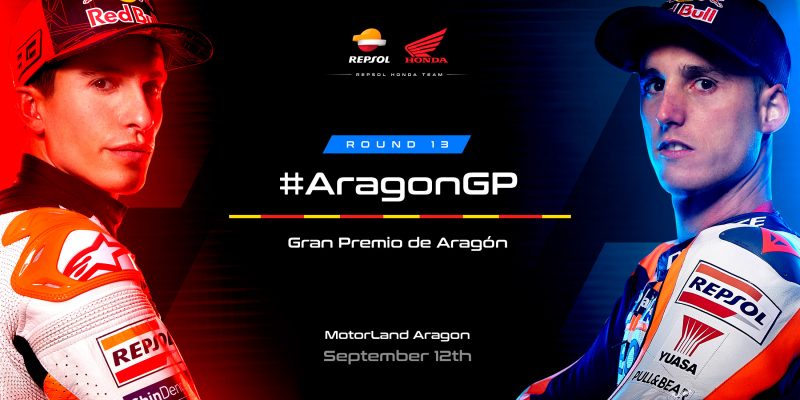 A classically strong circuit for the Honda RC213V, Marc Marquez and Pol Espargaro are aiming for further improvements at round 13 in Aragon.

Since first hosting a Grand Prix in 2010, Aragon has seen thrilling races over the past decade. In seven of those 12 races, a Honda machine has come out on top in the premier class. In 2020, rookie Alex Marquez put together two strong races and claimed his first dry podium finish in the MotoGP class while Takaaki Nakagami took pole position on the Honda RC213V. The historic form is there for Marc Marquez and Pol Espargaro to deliver strong results this weekend.

For Marc Marquez, the Aragon GP has been a happy hunting ground with five wins and five pole positions since joining the Repsol Honda Team and the circuit is just a two-hour journey from his home of Cervera. After a difficult weekend in Silverstone, the eight-time World Champion is keen to put together a consistent weekend and return to battling with the top riders as in previous rounds. With ten left hand corners and seven rights, the layout of MotorLand Aragon should suit Marquez who has been making improvements with each round, showing more consistent speed.

Pol Espargaro arrives in Spain fresh off his best weekend of the year with the Repsol Honda Team and ready for even more. A pole position, which he converted into leading the Grand Prix, and a fifth-place finish at the end provided a huge confidence boost to the #44 who is now aiming to continue this form at a circuit which has traditionally suited the Honda RC213V. Espargaro’s best finish in the premier class in Aragon came last year when he took fourth in the second race. With 52 World Championship points, Espargaro is locked in a tight battle for top Honda honours and is now just seven points behind his teammate.

On track action at the 5.1-kilometre-long Aragon circuit will begin at 09:55 Local Time on Friday, September 10 with the 23-lap race commencing at 14:00 Local Time on Sunday, 12 September. There will be no time to rest after the race as the entire Repsol Honda Team will travel directly to Misano for round 14 of the 2021 MotoGP World Championship.

“Aragon is always a track that I enjoy racing at and we have had strong results there in the past. But we can’t rely on what we did in the past, in 2021 we arrive there in a different situation so have to approach the weekend in the correct way, see our level and see what our opponents are doing. It’s great to be back racing at MotorLand after missing the rounds in 2020 and hopefully we can put on a good show for the fans. In recent races we have been closer to the front so the aim is to continue this and see what’s possible on Sunday.”

“I am very excited to be riding in Aragon, the weekend in Silverstone was a great one for us. In the past the Honda has been the bike I was trying to beat in Aragon and now I am riding it, so I am very interested to see what we can do together this weekend. We are arriving in a good moment after the strong Silverstone weekend and I am excited to go racing again. Let’s keep working to finish the season strongly and keep learning.”