Located amongst the vast natural beauty of the northern Kanto district, the twin ring circuit at Motegi in Japan consists of a 1.5 mile oval and a 2.9 mile road course constructed to international standards. Built by Honda as the ultimate test facility in August 1997, the road circuit became home to MotoGP in 2000 whilst the oval is designed to introduce American motorsports culture to the country.

Twin Ring Motegi is a major attraction for motorsports fans all year round as it is the venue for the Honda Collection Hall, a museum which houses an illustrious collection of motorcycle, car and racing machines from throughout the ages. The complex also includes a safety and riding school, dirt track, go-karts, hotel, restaurant, shops and event halls and currently employs some 300 staff. 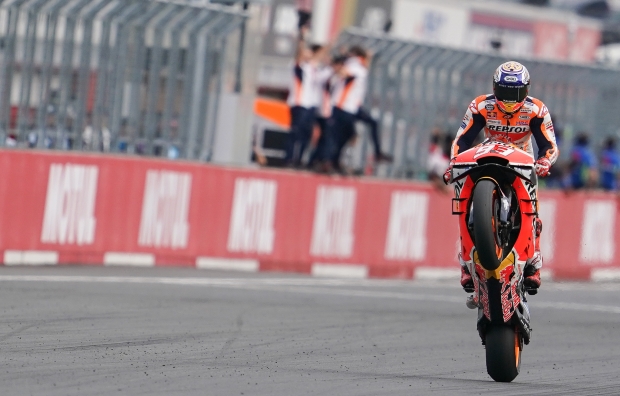 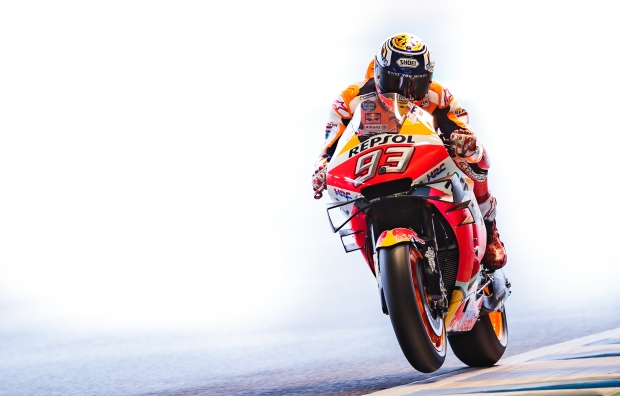 Positive progress for the Repsol Honda Team on Friday in Motegi

Eight-time World Champion Marc Marquez finished a consistent first day in Japan as the third fastest rider as Jorge Lorenzo made a step forward. Cool conditions on Friday at the Twin Ring Motegi Circuit didn’t deter the local fans who filtered into the track from early in the morning.  A… read more. 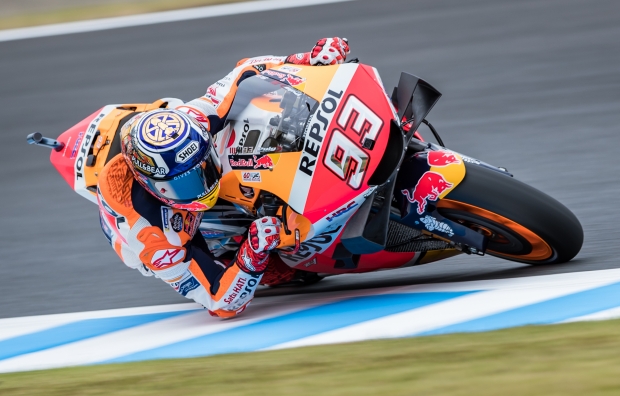 After the stellar performance of Marc Marquez to win both the Thai GP and 2019 MotoGP World Championship, attention now turns to sealing the 2019 MotoGP Constructor Championship for Honda. The 4.8 kilometre long Twin Ring Motegi circuit is not just the host of the Japanese Grand Prix, but also… read more. 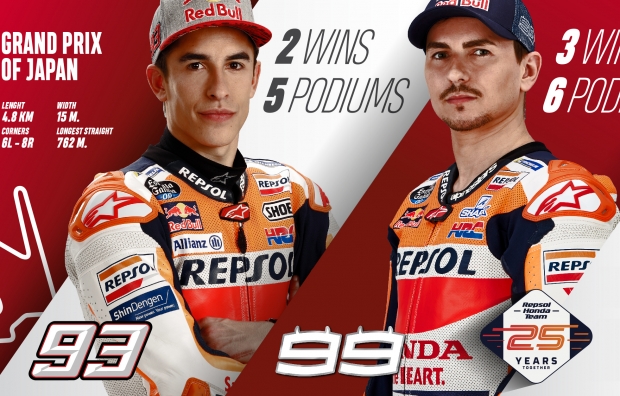 Marc Marquez took an incredible victory at Twin Ring Motegi today, becoming the 2018 MotoGP World Champion with three races to go, in front of Honda President and CEO Mr Takahiro Hachigo, who joined him on the podium. After starting from the sixth spot on the grid, Marc was immediately… read more. 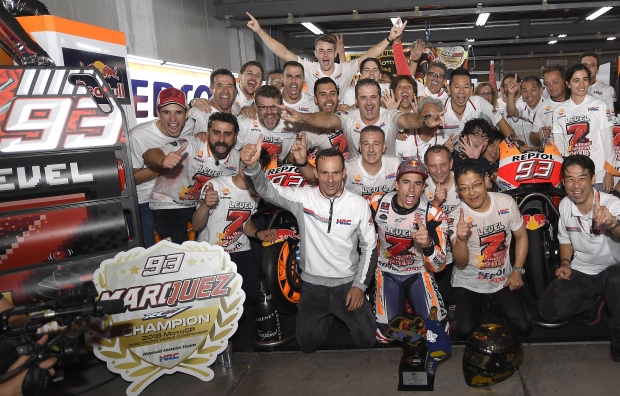 Marc Marquez qualified on a very close second row for tomorrow’s Japanese Grand Prix, which will be his first opportunity to clinch the 2018 MotoGP Title. On a sunny Saturday at Twin Ring Motegi, Marc was fourth in this morning’s FP3 session and first in FP4 before setting the sixth-fastest… read more. 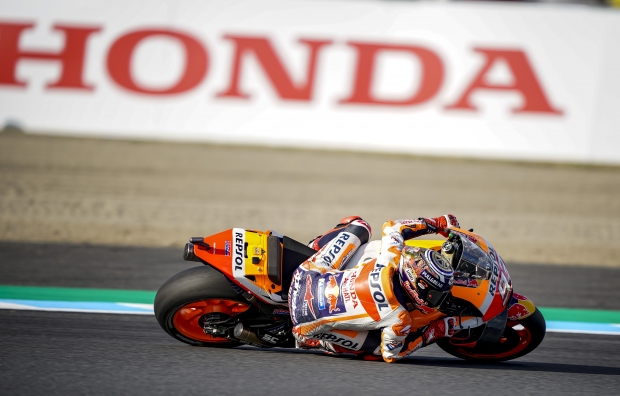 The Japanese Grand Prix got underway today at Twin Ring Motegi in mixed weather conditions, with a dry morning session followed by a wet and damp afternoon stint. Marc Marquez led FP1 at length before dropping to fourth in the final minutes. Fourth-fastest was also Marc’s overall result for the… read more. 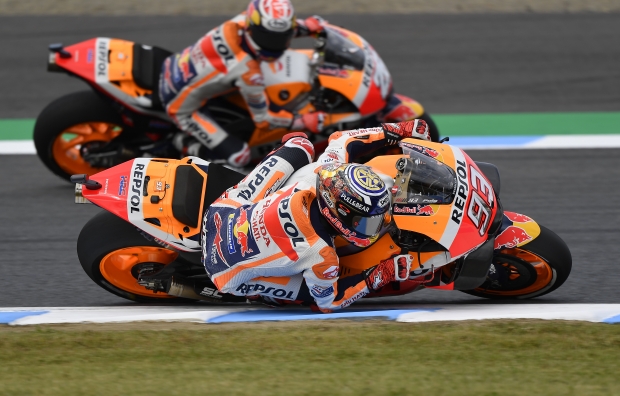 Marc Marquez arrives in Motegi following his powerful win in Thailand, which extended his Championship lead to 77 points over nearest rival Andrea Dovizioso and 99 over Valentino Rossi. With a maximum of 100 points available across the season’s remaining four races, Marc could mathematically clinch the 2018 MotoGP World… read more. 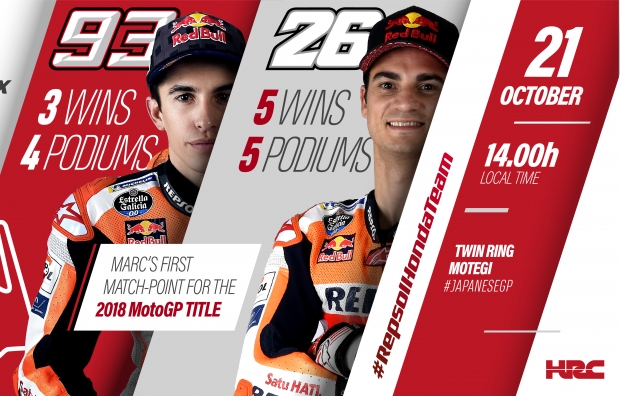 With the Japanese Grand Prix facing wet weather all weekend, the race was no exception and the tricky conditions made the epic duel between Title contenders Marc Marquez and Andrea Dovizioso even more dramatic. The Italian prevailed over the Repsol Honda rider fighting to the last corner of the last… read more. 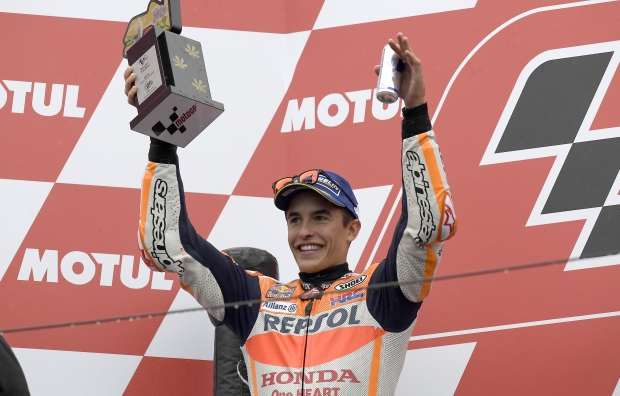 After displaying a strong pace in every session at the Japanese Grand Prix, Repsol Honda’s Marc Marquez set the third fastest time of the day at the end of a thrilling qualifying session on a drying Motegi track. After switching from rain tyres to slicks for his second time attack,… read more. 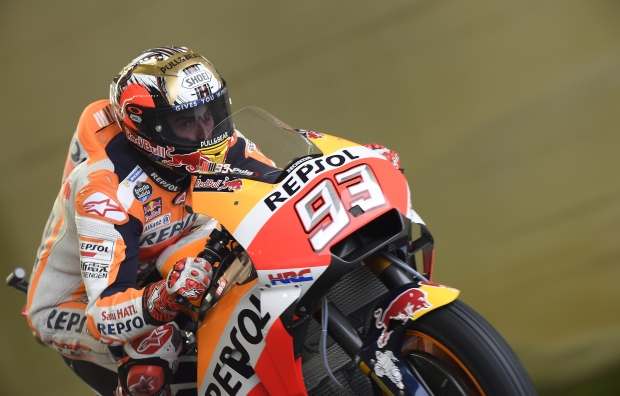 The two free practice sessions of the Japanese Grand Prix’s opening day were characterised by steady rain and cool temperatures, but Repsol Honda’s Marc Marquez showed a great pace from the beginning of the action. Marc was fastest in the FP1 session and was pushing hard during FP2 after fitting… read more. 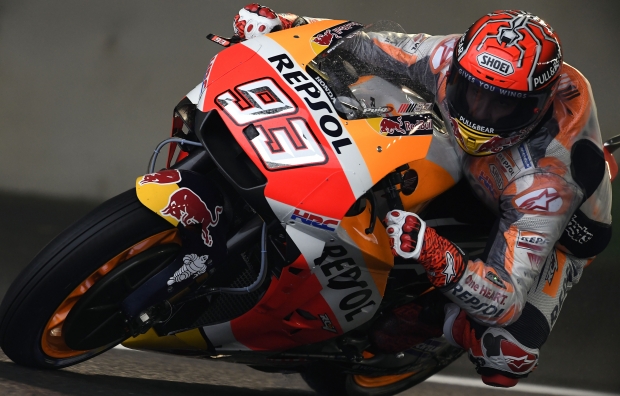 The Repsol Honda Team arrive in Motegi, the first in a challenging three-race back-to-back flyaway stint and Honda’s home Grand Prix, having achieved a fantastic 1-2 result at the Aragon Grand Prix. Marquez’s powerful win at his home race extended his Championship lead to 16 points over nearest rival Andrea… read more. 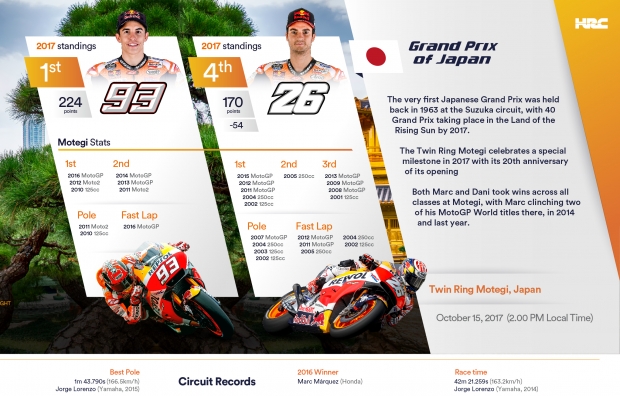 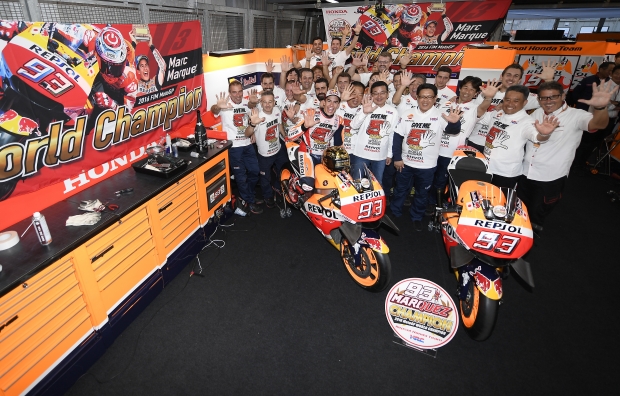 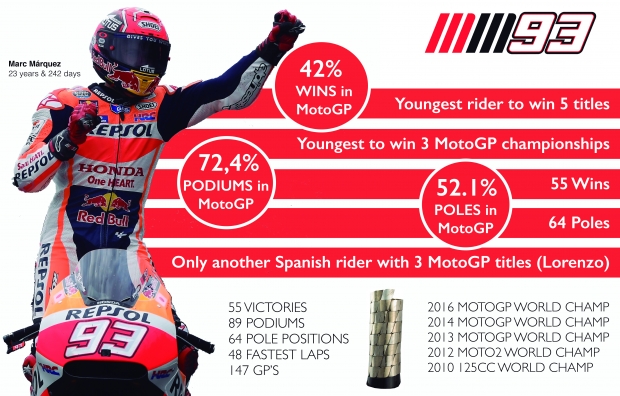 Front row start for Marquez in Japanese GP at Motegi 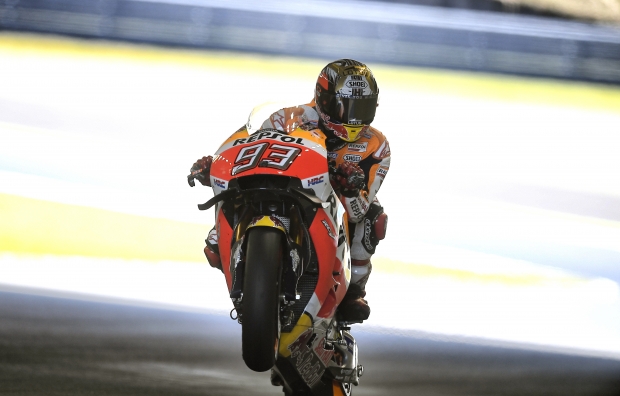 Dani Pedrosa fell heavily Friday during Free Practice 2 at Motegi, suffering a right-collarbone fracture that will exclude him from the Grand Prix. Dani will take a flight back to Spain later this evening in order to undergo surgery. The Repsol Honda rider will be replaced by HRC test rider Hiroshi… read more. 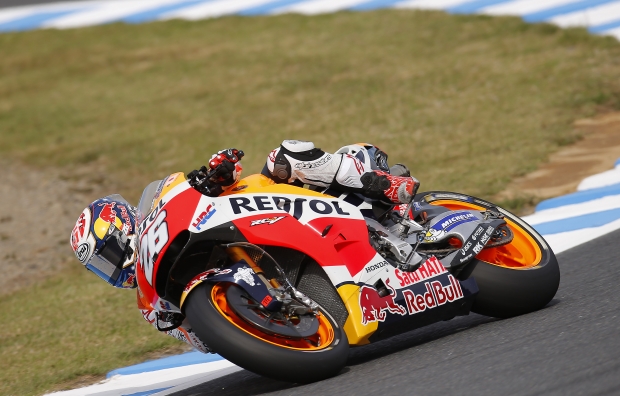 Fresh from back-to-back wins with Dani Pedrosa at Misano and Marc Marquez at Aragón, the Repsol Honda Team are en route to Motegi for the first of three fly-away races, on a trip that will also bring them to Australia and Malaysia. Honda’s home Grand Prix is held at the… read more. 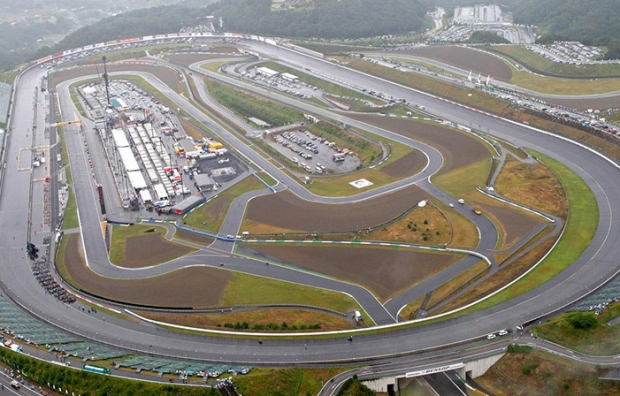 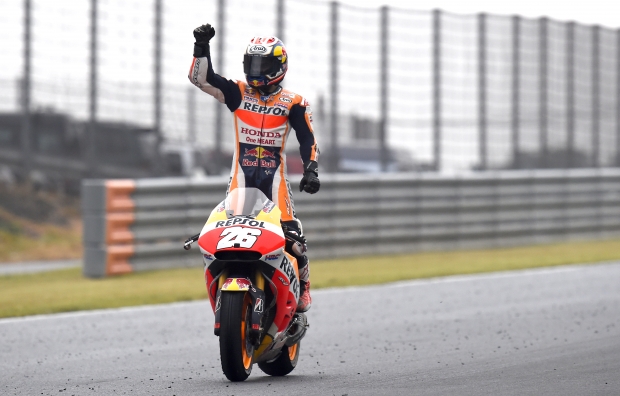 Front row start for Marquez in Motegi with Pedrosa in 6th

Repsol Honda’s Marc Marquez will start tomorrow’s Japanese GP from 3rd on the grid after a closely contested qualifying session. Teammate Dani Pedrosa will begin from the second row in 6th position. The final practice session before qualifying – FP4 – was red flagged after just ten minutes due to… read more. 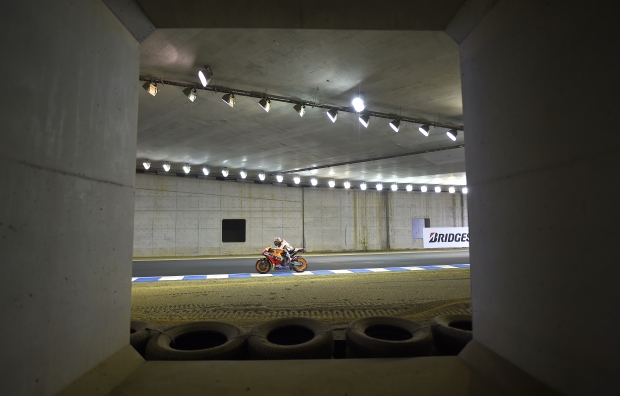 Japanese GP gets underway in Motegi for Repsol Honda Team

The first practice sessions for the GP of Japan have taken place in Motegi today, with Repsol Honda’s Dani Pedrosa finishing second fastest for the day in the combined times and his teammate Marc Marquez – who sustained a training injury last week – in seventh. Blue skies greeted the… read more. 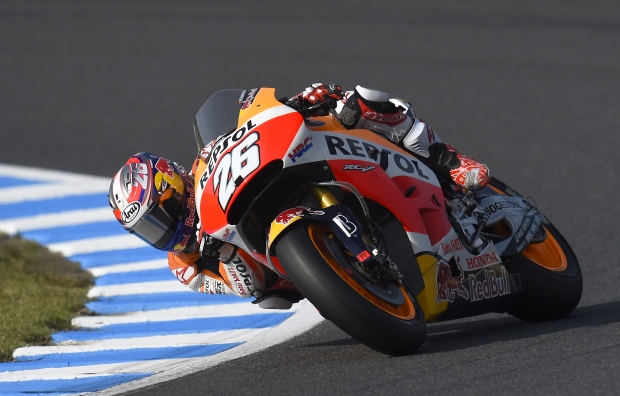 The MotoGP paddock is en route to Motegi, Japan for the first of the three-in-a-row fly away races. Reigning champion – Marc Marquez – had a difficult race in Aragon, when he crashed out out on just the second lap. To add insult to injury, the young Spaniard suffered a… read more. 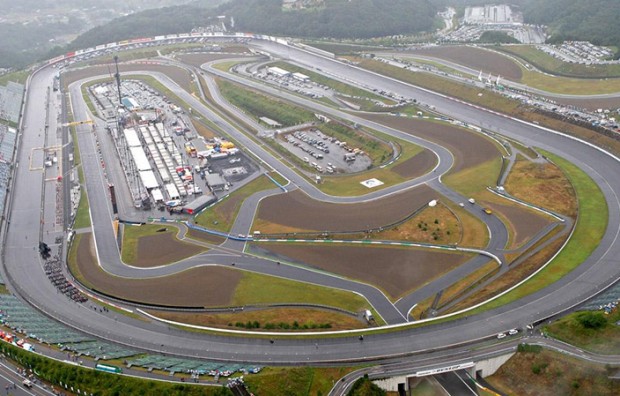 Repsol Honda’s Marc Marquez has clinched his second consecutive Championship on Honda’s home soil, becoming the first Honda rider to clinch a World title – in any class – at the Motegi circuit, with his well earned second place finish. Teammate Dani Pedrosa fought to the end and finished just… read more. 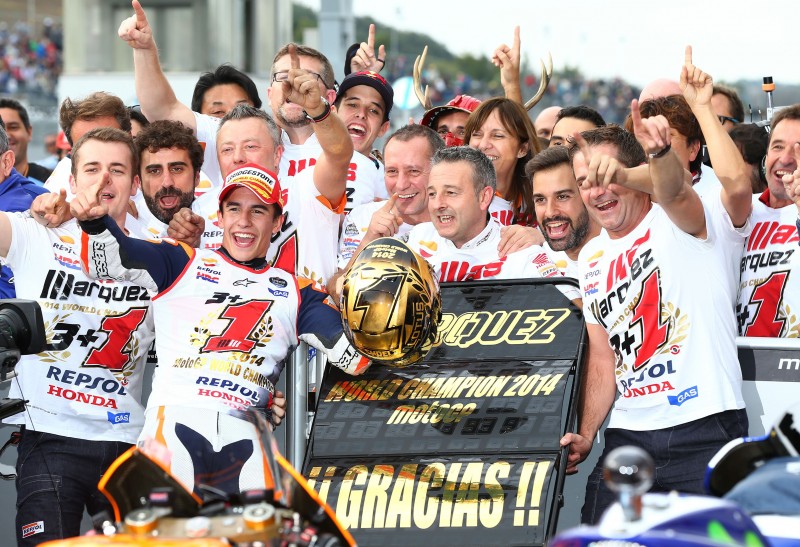 It was a toughly fought battle for pole position in Motegi, with several riders vying for the top spot and ten riders within six seconds of each other. Repsol Honda’s Dani Pedrosa and Marc Marquez at times both led the session but on his final lap, in the penultimate corner,… read more. 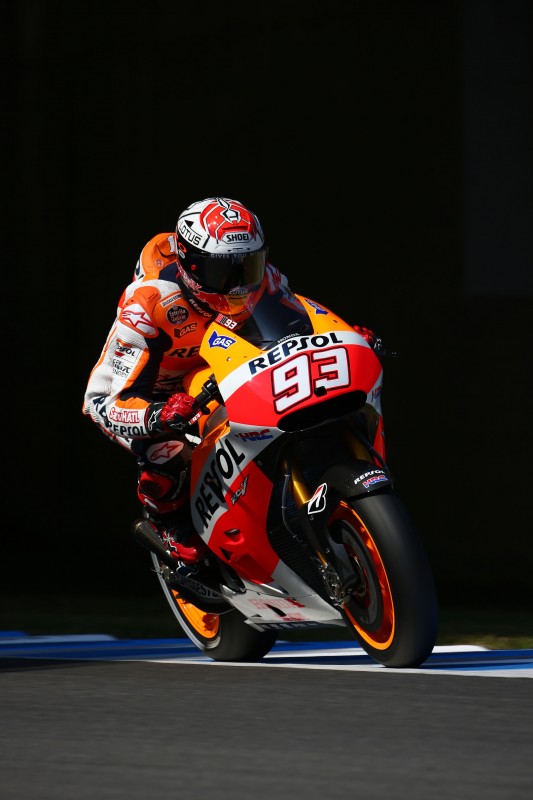 Pedrosa 4th and Marquez 6th on first day in Motegi

The Grand Prix of Japan got underway today where Repsol Honda’s Marc Marquez will have his first opportunity to clinch the 2014 title. With limited track time due to treacherous conditions in 2013, neither Marc or teammate Dani Pedrosa wasted any time taking to the track this morning to rediscover… read more. 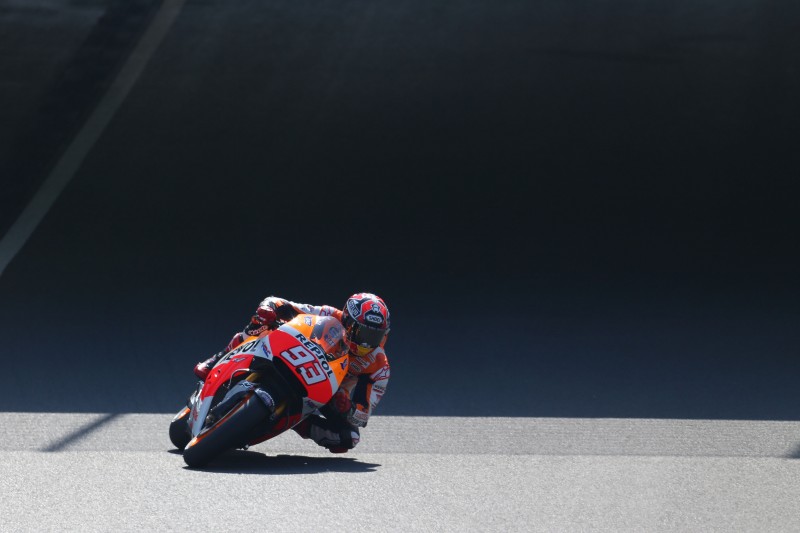 After a difficult race in Aragón, Spain, where late rain caused havoc in the dying laps and for the first time in 36 races (Misano 2012) a Repsol Honda rider failed to take a podium finish, Marc Marquez and Dani Pedrosa are en route to Japan for the first of… read more. 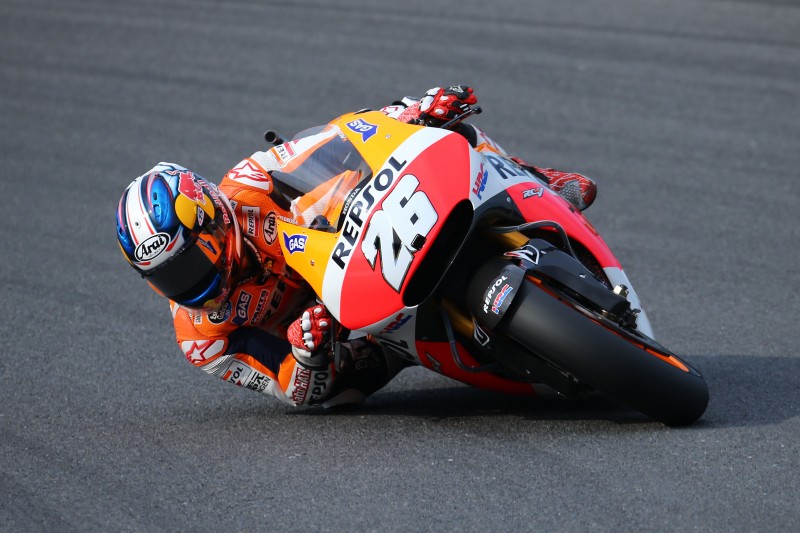