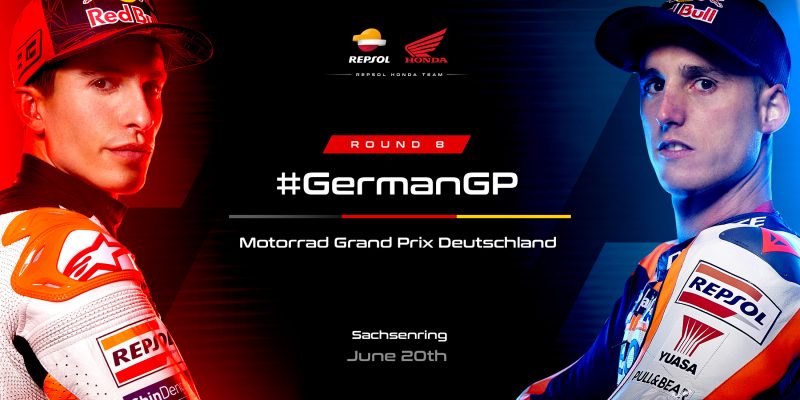 After a series of difficult races and a fruitful test, the German GP offers Marc Marquez and Pol Espargaro a chance to apply their learnings.

The MotoGP World Championship will return to the Sachsenring for the first time since 2019, the 3.7-kilometre-long circuit known for its tight layout and 10 left-hand corners. In the past it has been a happy hunting ground for the Repsol Honda Team who have won there each year since 2010, but the focus this year remains on improving on recent results and finding the form the team is accustomed to.

In previous visits, Marc Marquez has been peerless around the Sachsenring and has taken victory in all of his seven premier-class Grand Prix starts for the Repsol Honda Team. Marquez arrives with his most intense day of riding since his return from injury in his pocket but knows that continuing his run of wins is not the priority this weekend. Continuing to adapt both his style and the Repsol Honda Team RC213V to his physical condition to his maximise his results on track is the aim for the weekend.

Monday’s post-race test was an important day for Pol Espargaro as he and his side of the Repsol Honda Team garage worked to improve rear grip. The unique layout of the Sachsenring is unlike any of the circuits Espargaro has ridden the RC213V at so far. Regardless of the circuit, Espargaro’s objective for the weekend remains the same: delivering on his potential after several hard races. Making gains, especially on Saturday, will be crucial for the second half of the season. Espargaro has twice finished inside the top ten at the Sachsenring in the premier class.

The weekend begins with Free Practice 1 at 09:55 Local Time on Friday, June 18 with the flag for the 30-lap race on Sunday dropping at 14:00 Local Time on June 20. Immediately after the race the Repsol Honda Team will travel to Assen for the following round.

“After the test day in Barcelona, the week between races went very well to recover. In this test we worked a lot and now we come to the Sachsenring where I have always enjoyed riding in the past. This year of course we arrive in a different position, but hopefully the layout should allow us to be more competitive from the physical side. Let’s see what the weekend brings.”

“We arrive here in Germany after a good day of testing in Spain. It has been a hard few races so it is important to keep our focus and do what we can this weekend. The Honda has been strong here in the past and with what we found in the test I hope that we can make some steps forward. Everything in MotoGP is so close so even a small improvement will help a lot, especially on Saturdays. We now have two races before the summer break, we want to head into the break on a positive.”