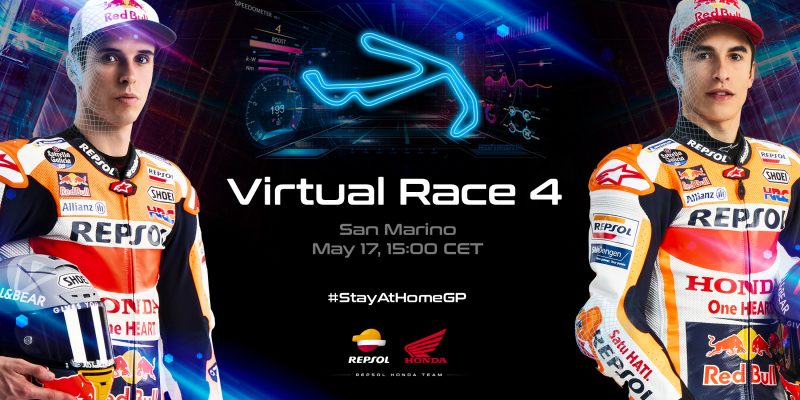 It’s a trip to the virtual seaside for the fourth online race of 2020 as Alex Marquez and Marc Marquez eye further improvements.

Consistent performances, a victory and two podiums for Alex and three successive top five finishes for Marc, have put the Repsol Honda Team duo in prime position to challenge for the top spots in the virtual championship standings but the pair are determined to improve their recent form and put on a show in Misano.

After taking the first ever win in a virtual race, Alex Marquez showed his race winning potential in Jerez once again as he charged home to second place. The MotoGP rookie has already proven himself an experienced hand on the virtual RC213V and extra time practicing in the MotoGP 2020 game has the 24-year old ready to bring the fight. Alex enters the round tied for the championship lead with Viñales and Bagnaia.

Like his team-mate, Marc enters the round aiming for more as he hunts his first podium finish of the season. The reigning World Champion enjoyed a thrilling duel for victory in San Marino on his way to the 2019 MotoGP crown and is ready to put on another exciting show for the fans. With all of the riders having only recently received the MotoGP 2020 video game, Marc feels he should be on a more even playing field and has upped his practice for round four.

Racing at the Misano World Circuit Marco Simoncelli will begin at 15:00 Local Time (GMT+2) on Sunday May 17th. The MotoGP race will be just nine laps, guaranteeing frantic action from flag to flag.

“Time to go again! Misano has not always been one of my favourite circuits in real life but I think it will be a good race with the rest of the MotoGP riders. You can get a little bit creative with some of the lines you take and there’s more chance to avoid crashes at Turn One. I want to win again, in Jerez I think I had a good chance to do this without the crash at the start. No matter what, I’m sure it’ll be another funny show for all the fans.”

“I have been practicing a little more than the previous races. With the new game I am much closer because we all started playing at more or less the same time. We have had a lot of fun and I’ve really enjoyed all of the races because it’s more relaxed than in the paddock so we are able to share some jokes with everyone. Let’s see what happens in Misano, the last time I was there we had a great battle with Quartararo.”