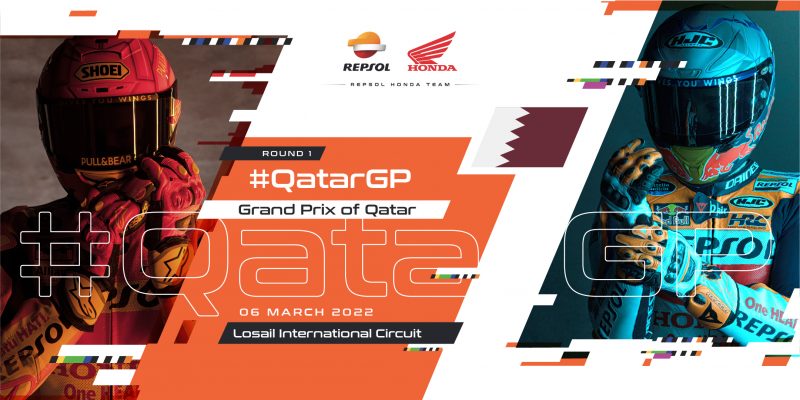 For the 28th consecutive season, the Repsol Honda Team will line up on the MotoGP World Championship grid chasing victory. 2022 will be the longest MotoGP season to date with 21 races taking the Repsol Honda Team across the world from Qatar to Indonesia, Argentina to America, all throughout Europe and across Asia. A heavily revised Honda RC213V will be the weapon of choice for Marc Marquez and Pol Espargaro as they compete with 22 other world class riders between early March and early-November.

As has become tradition, the new season will begin under the unique floodlights of the Losail International Circuit just outside of Doha, Qatar. First added to the calendar in 2004, it became a night race in 2008 and has opened each season since 2007, 2020 the only exception.

Marc Marquez is no stranger to this situation, still just 29 years old, the #93 now enters his tenth season in the premier class with the Repsol Honda Team and with 142 MotoGP race starts is the third most experienced rider on the grid. With the hardships of 2020 and 2021 put behind him, Marquez’s objective for the season is clear: returning to the top. From his last seven outings at the Losail International Circuit Marquez has claimed victory once and finished on the podium in all but two occasions.

Pol Espargaro ended the final pre-season test in Mandalika, Indonesia as the fastest rider over a single lap and showing strong pace over longer runs. But Espargaro is not starting the year resting on his testing laurels, the #44 ended 2021 on an upward trajectory and maintaining this momentum with the new RC213V is key. Although the bike is still early in its overall development, Espargaro has helped to highlight the potential of the bike and is eager to see what it can do over 22 laps at the Qatar GP. Since his MotoGP debut in 2013, Espargaro has achieved a best result of seventh place under the floodlights.

The race will take place at 18:00 Local Time on Sunday, March 06. The race start has been brought forward slightly in 2022 and should produce even more spectacular viewing as the sun sets just as the lights go out. Free Practice 1 is scheduled for 13:40 Local Time on Friday, the first chance to see the Repsol Honda Team in their full 2022 livery – revealed just before the test in Indonesia.

“Well, what can I say about the start of 2022? After what we have overcome recently my motivation to start the season is huge, we have come through something difficult and now it’s time to enjoy. But not just enjoying riding, enjoying competing and enjoying fighting at the front again. This is my tenth year in the MotoGP class and now I am one of the most experienced in the class, there’s many new competitors but the goal is still the same: to fight for the World Championship. We arrive with a new bike, so we need to see how it behaves in Qatar, but we have built a good base and I am looking forward to the weekend and to racing again. It will be my first-time racing in Qatar since 2019, but I am ready. Let’s get the season started!”

“Coming from the good tests we had, of course I am excited to get started with a new season. I have been training to my maximum in the winter to be as physically prepared as possible. We arrive now in a very different situation to 12 months ago, I know Honda, I know my team and although this RC213V is new – I am understanding it more and more. Yes, we had a good pre-season but when you go racing everything is different. This weekend in Qatar is about making a base line and improving on it each week, I want to be fighting at the front each weekend but it’s early. Let’s see what happens, who appears with what and how the slightly different race time will change the conditions. Overall, I’m just happy I get to ride again.”