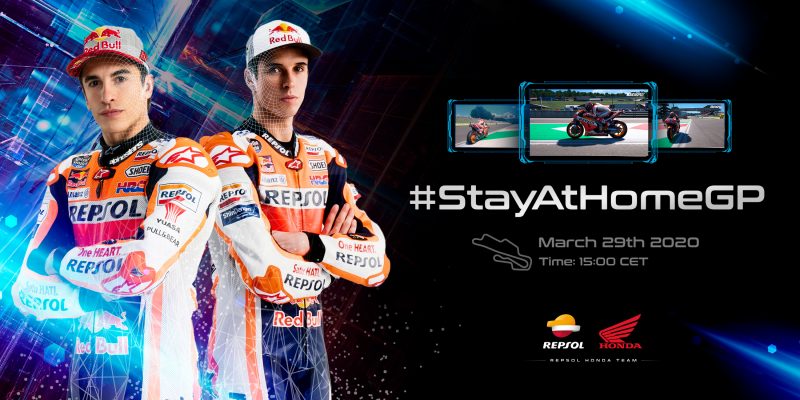 Marc Marquez and Alex Marquez are primed to compete in MotoGP’s first virtual race, a six-lap dash in Mugello.

The Repsol Honda duo lead a multitude of MotoGP riders into the weekend’s #StayAtHomeGP, a special race in the MotoGP19 video game. Sunday, March 29, will see Marc and Alex compete in a Qualifying session to decide the grid for the race just a few minutes later.

With limited running time during the event, preparation and testing beforehand will be critical to get their virtual RC213Vs dialled in.

The race will be shown LIVE on YouTube with the broadcast beginning at 15:00 CET.

“All of us are living in a difficult moment so it will be really nice to have some fun and bring some action to the fans. We are doing this for all of the people who love MotoGP, to give them something nice during these incredibly hard days, thanks to the other riders and the championship for putting this together. I have been remaining at home, still training as much as I can while staying safe. Alex and I enjoy playing the MotoGP game together but now we must be a little more serious about it. No matter what we are racing, as riders we want to win! With the race only being six laps I think we can go full aggression and push the whole way. I’m looking forward to doing some racing!”

“We have a responsibility to encourage people to stay inside and follow the guidelines, if they can’t come to the races then we can bring the races to them. I have been following the advice and staying inside, adjusting my training and how I live so that we can all get through this. I thought my ‘racing debut’ would be a little different but I am looking forward to it either way. Normally I am quite competitive in the MotoGP game when I play with friends, so I am not sure I am a true rookie but it is very hard to know the level of the other riders. Let’s see how it goes, Mugello is a fun circuit to ride as it’s very fast and especially into Turn 1 you can make some big moves. I hope that the fans can enjoy this event with us!”