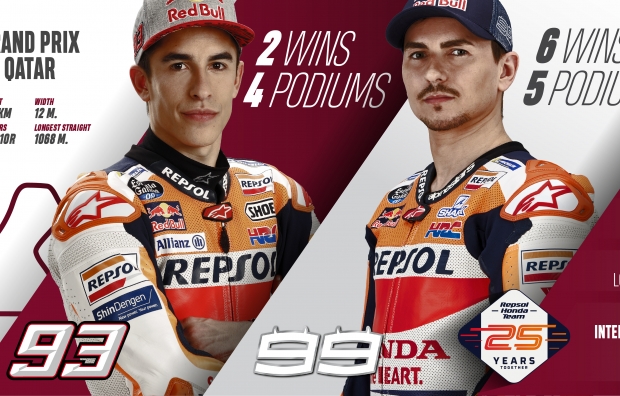 2019 marks 25 years of collaboration between HRC and Repsol as the iconic squad prepares for another year of competition with two champion riders.

112 days after the Valencia GP, the MotoGP™ World Championship is set to roar back to life under the unique Qatar floodlights. 2019 sees the Repsol Honda Team welcome five-time world champion Jorge Lorenzo alongside Marc Marquez and celebrate a 25-year partnership between Repsol and HRC.

During their 25 years racing at the highest level in motorcycle racing, Repsol and Honda have achieved 14 world championships, 168 victories, 427 podiums, 177 pole positions and 182 fastest laps. With 12 world titles between them, Marquez and Lorenzo form the most successful team on the MotoGP™ grid and begin another chapter in the Repsol Honda Team’s history.

Shoulder surgery in late December led to the most challenging off-season of Marc Marquez’s career and hundreds of hours of physiotherapy. Maintaining the mantra of ‘there are no points for testing’, the reigning World Champion had a, by his standards, subdued testing campaign but arrives in Qatar happy with the feeling of his Honda RC213V and with his physical condition. Since entering the premier class in 2013, Marquez has never finished outside of the top five in Qatar.

The Qatar GP will be Jorge Lorenzo’s racing debut in Repsol Honda Team colours. Having improved his lap time at the Qatar Test by 2.437 seconds, Lorenzo is looking to continue his adaptation to the Honda RC213V. Although Lorenzo was forced to miss the Sepang Test due to a broken scaphoid, his potential on the Honda is clear and the weekend will present him with more crucial bike time. With six wins and five podiums from 15 visits, the Losail International Circuit is amongst Lorenzo’s strongest.

The first MotoGP™ press conference of 2019 is set for 17:00 local time on Thursday, March 07 with both Marquez and Lorenzo in attendance after the traditional ‘class photo’. Free Practice One begins at 15:40 local time with the lights of the MotoGP™ race scheduled to go out at 20:00 local time on Sunday, March 10.

“Finally, it’s time to go racing once again! This winter has been different due to the surgery, I worked hard with five hours of physio per day with only one goal: arrive in the best conditions in the first race of the year. At the Qatar Test I felt much better than at the Malaysia Test and now I can say that I arrive almost 100%. Honda have done a lot to improve the bike and in the test we were feeling strong, especially for a circuit which usually isn’t the best for us, but we have to keep improving. Qatar is always a special round, not just because it is the first of the year but also because of the conditions. We will have to pay special attention to the temperature and consider everything before the race.”

“Lining up on the grid in Qatar is something I have been picturing during the entire off-season. It's a new era for me and for the team, it is a special moment to be riding for the Repsol Honda Team. I am ready to give everything to achieve the best results I can on the Honda. Unfortunately I am not yet at my maximum with the bike, but I still believe we can achieve a good result here in Qatar. As with every year, MotoGP is looking very competitive and we certainly have the package we need to fight with the best after some more time. I know we can achieve greatness.” 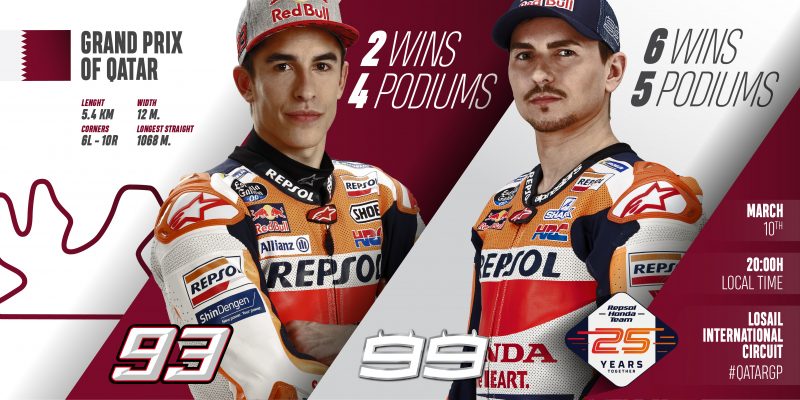