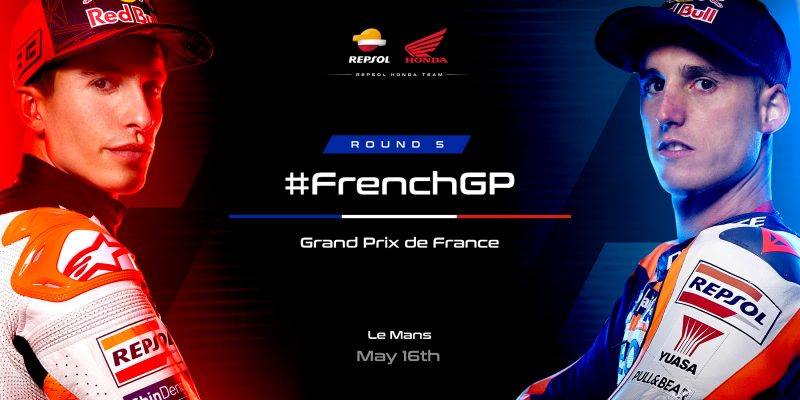 Round five presents another weekend of opportunity for the Repsol Honda Team as Marc Marquez and Pol Espargaro arrive ready and rested after a grueling Spanish GP.

It’s off to the Le Mans circuit in France for the fifth chapter of the 2021 MotoGP World Championship. Best known for hosting the 24-hour race, the French track has been a happy hunting ground for the Repsol Honda Team in recent years. In 2019, Marc Marquez claimed Honda’s 300th premier class win as he took his first back-to-back wins of the season. Then in 2020, rookie Alex Marquez put on a masterful wet-weather performance to earn his debut MotoGP podium in Repsol Honda Team colours.

Marc Marquez’s return to Jerez was an overall positive as he reduced the distance to the race winner after a complicated weekend. Continuing this trend of closing the gap to the front is again Marquez’s primary objective for the weekend as his recovery and return to competition moves forward. In previous visits to Le Mans Marquez has achieved four podium finishes, including three wins.

After a busy but productive one-day test in Jerez, Pol Espargaro arrives in France with an even deeper understanding of the Repsol Honda RC213V. Working through a number of options across the Monday helped the 2013 Moto2 World Champion improve the overall feel of his Honda. The Le Mans circuit has produced some of Espargaro’s most consistent results in the premier class with five top ten finishes and a podium from seven visits. With weather almost always an unpredictable element in Le Mans, round five may also present Espargaro with his first chance of running on the Honda in the wet.

Action at the French GP begins at 09:55 Local Time on Friday, May 14 with Free Practice 1 for the MotoGP class. The 27-lap premier class Grand Prix around the 4.2-kilometre-long circuit will commence at 14:00 Local Time on Sunday, May 16. Rain is currently forecast throughout the weekend in France, but it won’t dampen the spirits of the Repsol Honda Team.

“It has been a good week between races, I have been able to rest and continue my training and recovery. The goal for this weekend is to have less complications and continue working to improve. Step by step we are getting stronger and our goal is to continue the progress we have been making. The weather in Le Mans can always make things a little bit tricky but we will handle whatever happens.”

“The test we had on Monday was very helpful for me and the team, we tried many things and were able to understand more about the Honda. Last year we were able to finish on the podium in the wet at Le Mans, of course we would prefer it to be dry this weekend but the weather will be the same for everyone and it will give me an opportunity to try this bike in new conditions. The motivation is as high as always, I’m excited for another weekend.”