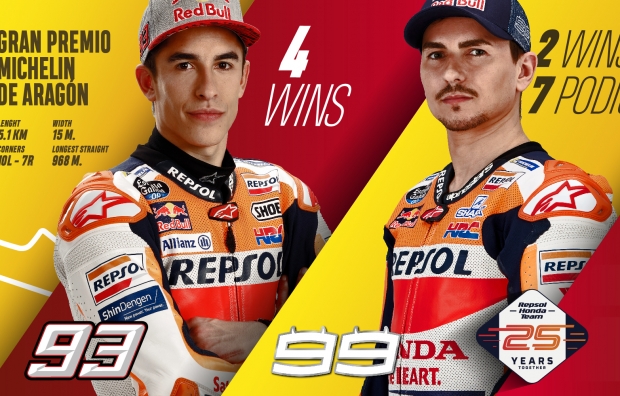 Both sides of the Repsol Honda Team garage are excited at the prospect of back-to-back races as they aim to continue the pace shown in Misano.

Added to the MotoGP World Championship calendar in 2010, Motorland Aragon has become a favourite amongst fans and riders with a number of memorable races over the years. The circuit presents a number of set up challenges for the team and several key points for the riders. Turn two is always a critical point, the right hand side of the tyre cool after the long straight and final corners. 2018 saw Turn 10 at the Aragon circuit named after the reigning champion Marc Marquez.

Marc Marquez is ready for any and all challenges as he chases a fifth premier class win at one of his favourite circuits on the calendar. The number 93 enters round 14 with a healthy 93-point lead over closest title rival Andrea Dovizioso, but remains fully focused on working towards a fourth straight victory in front of his home fans. The Gran Premio Michelin® de Aragon will see Marc Marquez conquer yet another milestone in his career as the reigning World Champion is scheduled to make his 200th Grand Prix start.

A promising start to the San Marino GP has Jorge Lorenzo confident of more improvements to come in Spain. Suffering from less physical discomfort after the race, Lorenzo and his Repsol Honda Team are eager to return to track to continue closing the distance to the front. With two premier class wins and seven podiums to his name at the Aragon circuit, Lorenzo has enjoyed significant past success.

Sunday’s MotoGP race will take place at 13:00 Local Time, an hour earlier than the originally scheduled 14:00.

“After a fantastic win in Misano I am excited to race again, especially in Aragon where I really feel like I am at home as it is so close to Cervera. It’s where the most people from my hometown come to watch and always the fans help to give me something extra. We have a good lead in the championship but it doesn’t change how we approach the weekend, we keep pushing and trying to achieve our maximum. Let’s see what happens in Aragon!”

“Aragon is a circuit I like and have had good results at in the past and in Misano we started the weekend well so I am hopeful we can be strong. Our objective is to keep closing the distance to the front as I improve physically and finish better than we did in Silverstone and in Misano. It will be good to race in front of the home fans before we begin the tour overseas.” 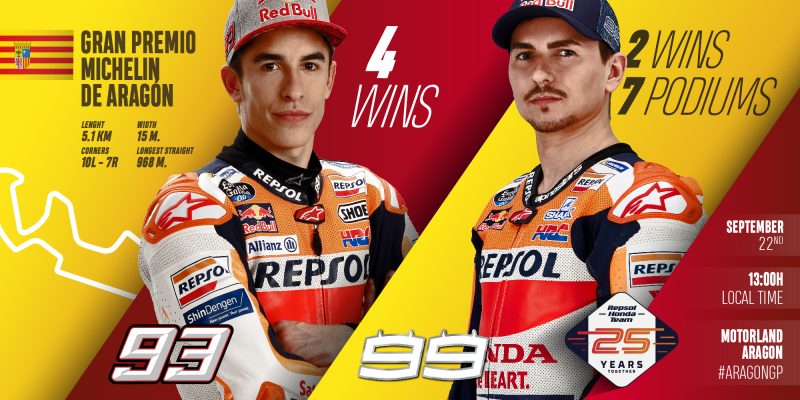