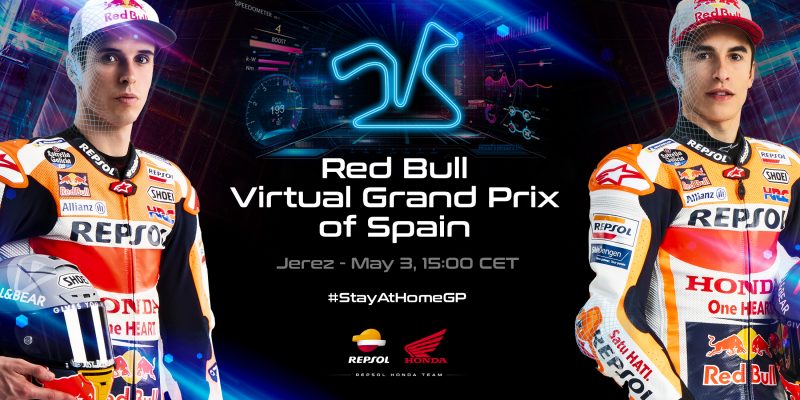 A new game, but the same goals for the Repsol Honda Team ahead of the third Virtual GP of 2020.

The Repsol Honda Team maintained their double-top five finishing record after a chaotic virtual race at the Red Bull Ring in Austria and now arrive on virtual home soil to do it once again. Alex Marquez and Marc Marquez will line up on Sunday, May 3 for the Red Bull Virtual GP of Spain in the new MotoGP 2020 game.

Alex has consistently been able to show his speed with a victory and a third-place finish at the opening two rounds. The enthusiastic MotoGP rookie was quick to get his hands on the new MotoGP game and has been learning his virtual 2020 Honda RC213V alongside his usual training at home.

Marc is currently tied for fourth in the standings after a fifth and fourth place finish. In both of the previous races, the eight-time world champion has been within touching distance of the podium and has gotten closer each race. With three premier class wins at Jerez, the reigning champion will be looking to use a real-life trick or two to get the edge on Sunday.

Racing will begin at 15:00 CET on Sunday, May 3 with Qualifying highlights shown before the 13-lap race.

“Another new challenge for this third Virtual Grand Prix with the new MotoGP 2020 game. A new game is a bit like getting a new bike, you know the base, but you need to push and experiment a little bit to find what those last differences are – the ones that really make the difference. Jerez is a fun track to play as you can use a few different lines in some places. I’m looking forward to the race, I just hope everyone is a little calmer than in the Red Bull Ring, and once again I hope we can make something that people enjoy this Sunday.”

“Jerez is a track I know very well, but I’ve had to study it again in the game to try and find some advantages. The Honda in the MotoGP 2020 game is good and after playing around with the setup I am able to put the bike where I want. I think that like in the last two races, staying out of trouble will be important as we saw a lot of riders really on the limit. But it’s all good fun, I’ve enjoyed the other two Virtual Grands Prix and the fans really seem to enjoy a lot.”