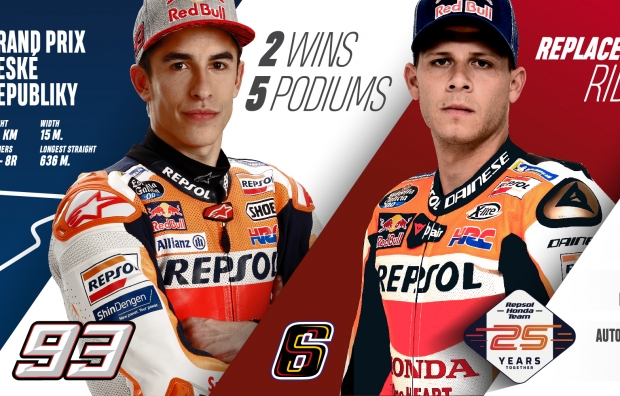 After a brief respite, the Repsol Honda Team return to action recharged and ready to attack the second half of 2019.

Always among the busiest and highest attended races of the year, the Czech GP is a favourite with fans and riders alike. The 5.4km long circuit welcomes the MotoGP World Championship back to action after their brief summer break, the Repsol Honda Team eager to return to track and continue fighting for victory.

Having delivered a supreme performance at the German GP, Marc Marquez entered the mid-season break with a generous 58-point lead in the MotoGP World Championship. Defending this advantage over his title rivals is the main objective for the reigning World Champion at the Czech GP. The Automotodrom Brno is amongst Marquez’s most consistent circuits – only once finishing off the podium since joining the premier class in 2013 and never finishing outside of the top five.

HRC Test Rider Stefan Bradl will again join Marc Marquez in the Repsol Honda Team garage as Jorge Lorenzo continues his recovery from his fall in Assen. The German rider has had an intense workload since finishing in the top ten at the Sachsenring; going on to take a podium finish at the legendary Suzuka 8 Hours race alongside his usual testing duties. Bradl is aiming for another strong weekend and is looking to build on what he and the team achieved in Germany.

Jorge Lorenzo continues to work on his recovery in order to return for the British GP.

“I am very excited to get back on the bike. Summer break is always nice to relax a little bit, but soon you miss the team and the bike! I am ready to get back to work and Brno is a fun circuit to ride. We finished the first half of the season in a very strong way and now we must keep our focus to continue this. Brno is a circuit where lots of riders are often strong so we can’t take anything for granted. I hope Jorge’s recovery is going well and we will soon have him back in the team.”

“Of course I’m looking forward to Brno and it’s great to be back with the Repsol Honda Team as I really enjoyed working with them at the Sachsenring. Our aim is to carry on from where we left in Germany and keep moving forward with the bike. I’m happy to get this chance again and I want to thank HRC and the Repsol Honda Team. Of course all the best to Jorge in his recovery and that he can come back strong.” 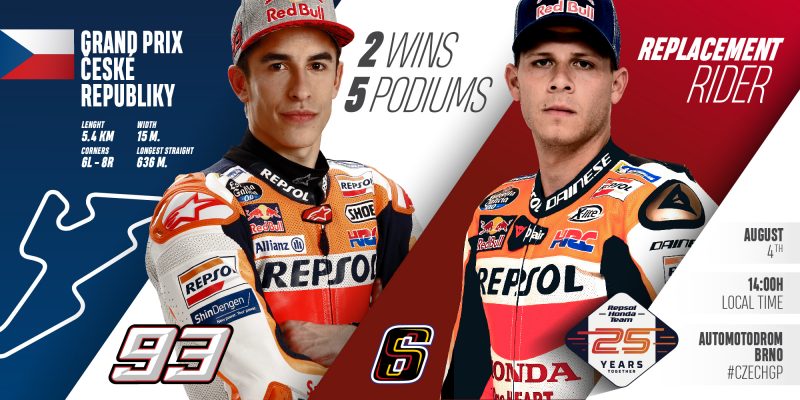