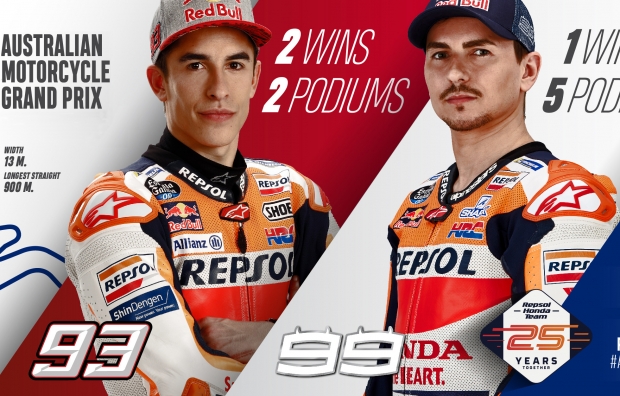 With the Riders and Constructors Championships in hand, the Repsol Honda Team shift their attentions to finishing 2019 in perfect form.

For round 17 of the 2019 MotoGP World Championship, the paddock heads to Australia’s Phillip Island Circuit. Located on the edge of the Bass Strait, the circuit is a favourite of many riders and has hosted some of the premier class’ most closely fought races in recent years. Australia presents eight-time MotoGP World Champion Marc Marquez with his first chance at passing Australian Mick Doohan’s record 54 premier class wins on Honda machinery.

Marquez has twice won the Australian GP and arrives in incredible form after taking his 13th straight podium, a feat he had never previously achieved in the premier class. With weather almost always playing a critical role at the sea-side race, Marquez and his crew enter the weekend ready to react to any and all conditions. Achieving a 55th MotoGP win would add to what has already been an incredible year for Marquez who has achieved the outright premier class pole record, taken Honda’s 300th premier class victory and is on track to beat the record for the most points scored in a MotoGP season.

Jorge Lorenzo arrives in Australia after taking positives away from the Japanese GP, posting some of his most competitive times since returning from injury. With the lessons learned in Japan, Lorenzo and his side of the Repsol Honda Team garage are looking to confirm their findings at the fast and flowing Phillip Island.

On track action begins in Australia with Free Practice 1 at 10:50 Local Time on Friday, October 26 with the climax of the event, the 27-lap MotoGP race, getting underway at 15:00 Local Time on Sunday, October 27. Running on Friday will feature an additional third session as Michelin hold a 20 minute tyre test session at 15:55 Local Time.

“It’s one of my favourite tracks, Phillip Island, I really enjoy riding there a lot – especially the left corners! But it’s a circuit where many others, and especially Yamaha can be strong. Normally we have a lot of competition there and it will be a challenge as always. Our target is of course to try to win, but once the weekend begins, we will see where we are and assess the situation. We approach the whole event with the same mentality. Mick Doohan is one of the first names in my memory, Doohan versus Criville on the 500cc, so to equal his incredible numbers is special for me.”

“I am looking forward to Phillip Island to see if what we discovered in Japan can also help us there as it is a very different kind of circuit. I was unable to race there last year so I am looking forward to riding again, it’s a special circuit and in the past I have good memories of fighting for podiums and the win I had. Also we will have to pay attention to the weather because this can change the circumstances a lot.” 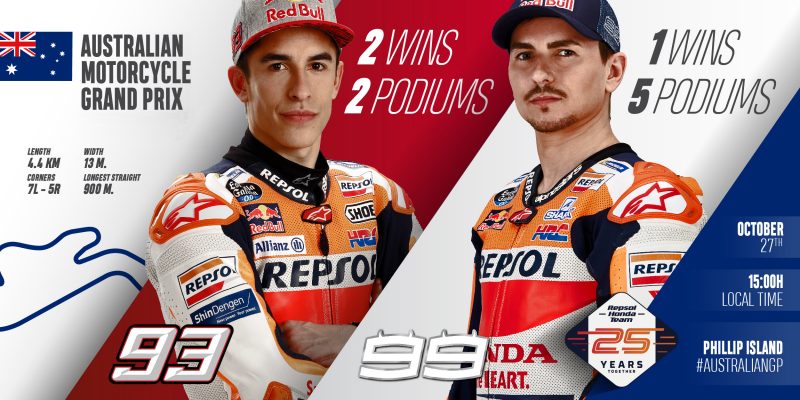