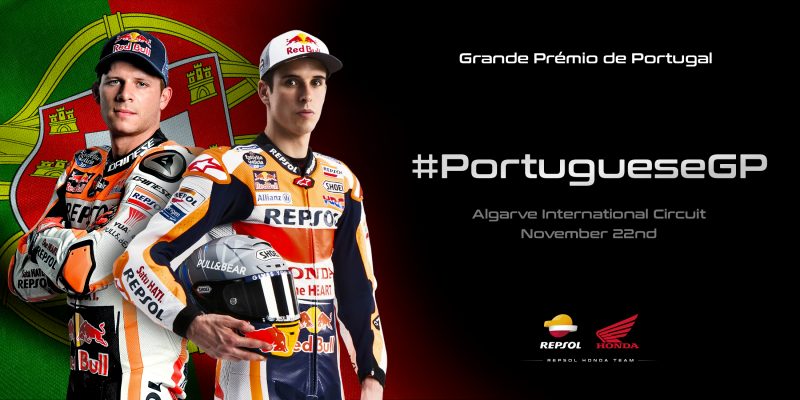 The Repsol Honda Team prepare for the final race of the unprecedented 2020 MotoGP World Championship as the series returns to Portugal.

126 days after the first race of the 2020 MotoGP season in Jerez, the curtain is set to come down. The impressive Algarve International Circuit will play host to the last dance of the year, many of the riders having sampled the circuit at a brief test on road bikes but few having raced there before.

Alex Marquez arrives at the circuit looking to end the year on a high after a bruising weekend in Valencia. The days between races have afforded the MotoGP rookie a chance to rest and recover after his 23.6g crash on Saturday and he is ready to face the new challenge of the Portimao circuit. Like many riders, Alex sampled the track earlier in the year aboard a road bike and is looking forward to trying the ups and downs of the Portuguese circuit on his Repsol Honda RC213V.

Stefan Bradl is one of only a few riders in the MotoGP class to have raced at Portimao, competing there in 2017 on the Honda CBR1000RR in WorldSBK. As HRC’s Test Rider, Bradl also spent two days on the RC213V at Portimao earlier in the year gathering data for this weekend. The German rider arrives in the strongest form of the year and after three straight point scoring finishes, the objective for the weekend is to extend that run to four.

Practice begins on Friday at 10:10 Local Time with a 70-minute FP1 session to allow riders and teams to learn the new circuit.

“After a few days of rest and recovery I am feeling better and my left wrist is feeling stronger. Portimao is a new circuit for almost everyone this weekend so it will be interesting to see how we all adapt and learn it. It’s a very physical track with a lot of blind corners so I think it will produce some very exciting racing. I’m looking forward to it!”

“When I tried the RC213V at Portimao during the test it was like a whole new circuit from when I raced there before, the level of the bike and also the electronics in MotoGP makes it completely different. I am looking forward to the weekend, the track is enjoyable to ride and I want to finish the season well. It has been very busy, especially these last three races, but I have enjoyed myself a lot.”