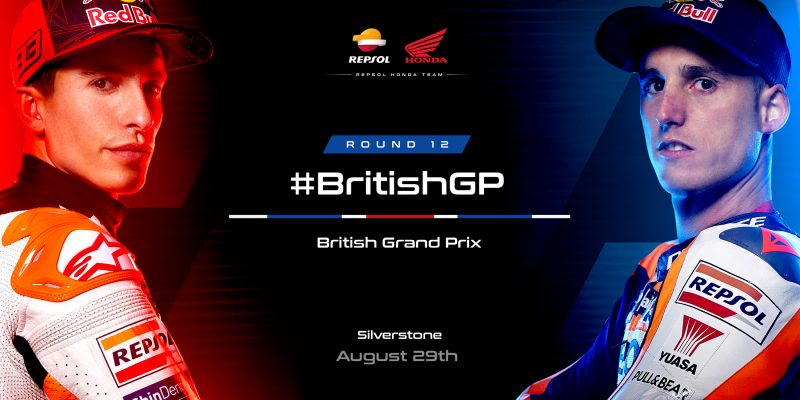 Marc Marquez and Pol Espargaro head north to the historic Silverstone circuit as the MotoGP World Championship prepares for round 12.

This weekend marks the return of the British Grand Prix, the championship forced to forgo the round in 2020 due to the pandemic. At 5.9 kilometers, Silverstone is the longest circuit on the current calendar and presents a fast and flowing layout for the MotoGP World Championship riders to overcome. As in Austria, weather will no doubt be a talking point throughout the weekend.

Marc Marquez’s record around Silverstone is respectable in the premier class with one win and two additional podiums from four finishes. In 2019, MotoGP fans were treated to a thrilling battle between the #93 and Alex Rins that went down to the wire. The eight-time World Champion arrives with the same mindset as Austria; capitalize on all the opportunities which present themselves and continue to work on developing the Honda RC213V. In Austria, Marquez proved that in both the wet and the dry conditions he and the Repsol Honda Team machine have the potential to challenge for victory.

On the other side of the Repsol Honda Team garage, Pol Espargaro arrives in the UK looking to find further improvements with his Honda RC213V after a pair of difficult races in Austria. Espargaro has taken points in all premier class editions of the British Grand Prix that he has finished with a best result of sixth place. In 2012, Espargaro claimed his debut pole position in the Moto2 class at the track.

Premier class action returns to Silverstone at 09:55 Local Time on Friday, August 27 with the race starting at 13:00 Local Time on, August 29. The 20-lap Grand Prix is sure to be another exciting affair as the World Championship is back into the usual racing-rhythm after the summer break.

“It will be great to see the British fans again after a year away. Racing in Austria with fans in the stands was enjoyable, so I am looking forward to doing it again in England! Our position between the races has not changed, this weekend is again all about working to improve and seeing what’s possible on Sunday. Last race we had the speed and were able to fight, but Silverstone is a very different circuit, and many can be strong there.”

“Let’s see what this weekend in Silverstone can bring us. It’s a long circuit, which is quite different to where we just were. First, we need to understand how the bike is working there and then make our plan for the weekend but the goal is to improve and try to fix the problems we had in Austria. I enjoyed racing in front of fans again last time out, so it’s good news we will do it again this weekend.”