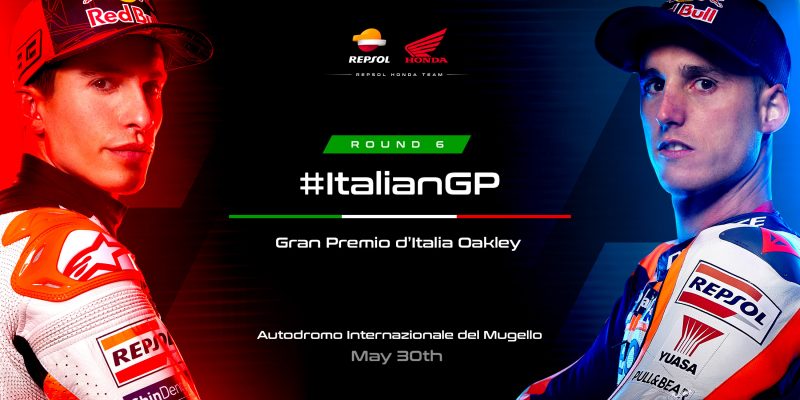 The MotoGP World Championship returns to the Autodromo Internazionale del Mugello for round six of the 2021 season, Marc Marquez and Pol Espargaro ready for their next challenges.

With a wet and wild French GP behind them, the Repsol Honda Team have regrouped and are ready to do it all again at the Italian Grand Prix. Having been unable to race in Mugello in 2020 due to the global pandemic, 2021 marks a welcome return to the iconic Italian circuit. 2019 produced a thrilling battle with Marc Marquez taking second by just 0.043s after an intense race with Petrucci and Dovizioso.

Marc Marquez arrives in Italy buoyed by his showing in France, leading the race and lapping faster than the leaders despite suffering a fall. Although his efforts were ultimately unrewarded, the eight-time World Champion showed he has lost none of his champion’s spirit during his recovery. But Marquez remains realistic about his physical condition and understands it will be another weekend of steady work. Mugello was the scene of Marquez’s first Grand Prix win back in 2010 in the 125cc class, joined on the podium by 2021 team-mate Pol Espargaro.

Continually showing flashes of speed throughout the 2021 season, Pol Espargaro is aiming to put everything together in Mugello and deliver on his potential. Impressive dry-weather speed was left to count for little on Sunday in France, but the Repsol Honda Team rider remains as determined and focused as ever heading to Italy. Confirming his dry-weather feeling from Le Mans on the Honda RC213V around the 5.2km long circuit will be Espargaro’s first objective for the weekend.

The Italian GP starts another double-header weekend with the Catalan Grand Prix following the very next weekend, an intense period for riders and teams but an exciting one for fans. Action in Italy begins at 09:55 Local Time on Friday, May 28 with Free Practice 1.

“I have had a good week to continue with the recovery process. We showed our potential in the wet in France and this weekend in Mugello we have to work well from Friday morning to try to be consistent and find good pace. I understand my physical limitations and know that it will not be the easiest of weekends to be close to the front in the dry. Now we arrive at two back-to-back races, which is a first for me this year. It will be more physically demanding, but we can manage it.”

“After not visiting the track in 2020 it will be nice to return to Mugello this year, riding a MotoGP bike down the straight there is something really unique. We will have to see how our bike is behaving there as it’s a very different circuit to where we have been. There will be a lot of competition this weekend, but if we work well throughout practice, I think we can be there and fighting. Then we have another race in Barcelona straight after, it’s going to be an exciting couple of weeks.”