Repsol Honda’s Marc Marquez has made it an unbelievable nine wins from nine races this season with a perfect weekend in Germany, clinching pole position, fastest race lap (lap 21/30 1’22.037) and the race victory. Teammate, Dani Pedrosa, finished in second place – just 1.4s behind Marc – to earn Honda’s third 1-2 finish of this incredible season.

It was a complicated race due to a brief rain shower at 13h30 – just half an hour before the race start – which left the track slightly wet. The riders exited the pits on wet tyres to test the conditions and asses how wet the track was. As they sat on the grid for fifteen minutes, the track began to dry rapidly and on the warm up lap fourteen riders including all the front runners – except Stefan Bradl (who already changed onto slicks on the grid) – entered the pits to swap bikes for the slick tyres and therefore start from the pit lane.

The riders jostled for position in the pit lane, creating a make-shift grid, and Marc and Dani – who were first and second in the initial starting grid – emerged into 10th and 13th respectively. Dani immediately began to pass and was up to 11th by the end of the first lap. Both riders found their rhythm quickly passing many riders and by lap five they were already on the back of Stefan Bradl. On lap six Marc took the lead and on lap seven Dani passed Stefan and was on Marc’s rear wheel.

The Repsol Honda duo then rode a perfect race as they not only controlled the gap to the rest of the field but gradually extended it, finishing a full ten seconds in front of third place Jorge Lorenzo. Marc has now won for the past five years in Sachsenring – all from pole position – and has become the first rider to win the opening nine races of the year since Giacomo Agostini won the first ten races of the 1970 season.

He continues to extend his lead in the Championship, now on 225 points and Dani reclaims second place with 148, ahead of Valentino Rossi on 141. Honda extend their lead in the Constructors Championship – now 71 points ahead – and continue to be the most successful manufacturer at the Sachsenring with nine wins since the introduction of the four-stroke MotoGP class in 2002. The Repsol Honda Team are now 135 points ahead in the Team’s Championship.

The team will now pack up in Germany and drive 660km to Brno, Czech Republic, for a three-day test starting on Tuesday.

"Before going out on track I thought it would be a similar race to the Assen, but in the end the surface dried out very quickly. I saw on the grid that Bradl had gone with the slick tyre option and I really had my doubts, because the area around the back of the track was still wet. I finally decided to see what Dani and Valentino were going to do, as they are my main rivals in the Championship and if you get it wrong in these races, you can lose a lot of points. That’s why I decided to copy their strategy. The race was nice, especially the first part which was when I enjoyed it the most!”

"The start of the race today was a bit like Assen. Rainfall before the race meant that half the track was wet, and in the time we took to set up on the grid and do the warm up lap it had been drying out; there was only one wet corner, but it was very wet. We had to change to the bike with slicks and almost all of the riders started from pit lane. We couldn’t fight for victory but we were very close, Marc was very fast today, too. Now we have the test at Brno and will try to find a few tenths somewhere, so that we can go faster and be even stronger at Indy.” 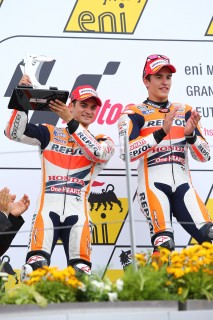 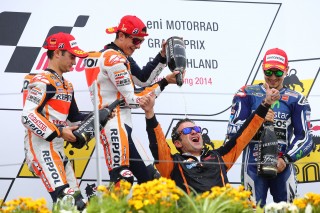 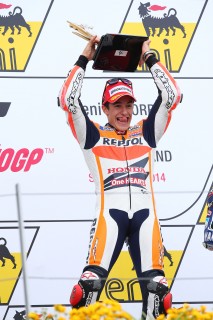 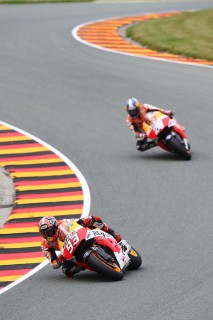 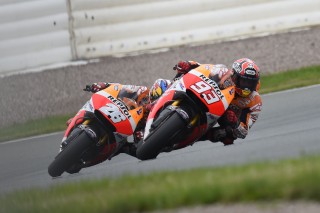 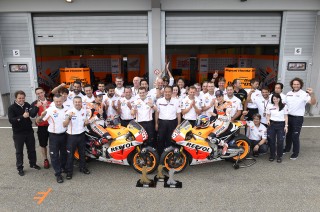