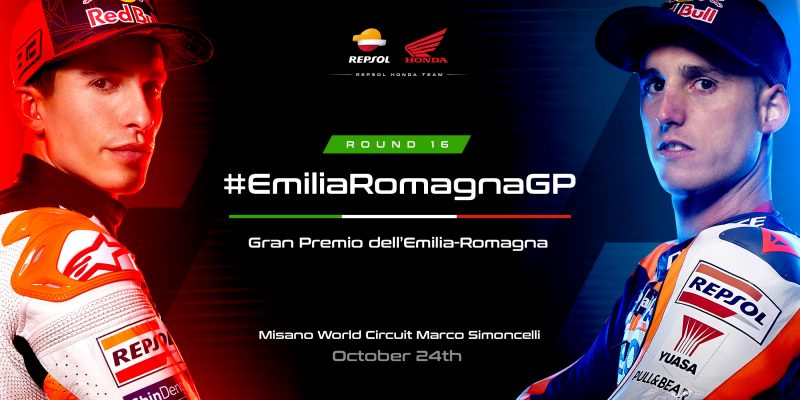 The Repsol Honda Team will return to the Misano World Circuit Marco Simoncelli for the second time in 2021, looking to build on their first race and a fruitful test at the track.

Of all the circuits on the 2021 MotoGP World Championship calendar, only the Losail International Circuit in Qatar will have had more on-track action than Misano when the season draws to a close. With a full race weekend and two intense days of testing already done, this next Grand Prix is set to be quick from the start. Although, early forecasts are predicting decidedly cooler conditions than the previous edition.

Austin race winner, Marc Marquez arrives back in Italy after not just his second victory of his comeback season, but also in the best form of the year. Three straight top-five finishes, including a podium in Aragon and a win in Austin, demonstrate the improvements Marquez and the Honda RC213V have made since being reunited in Portimao earlier in the year. A positive result earlier in Misano, taking a late fourth place in the race, and a busy but productive test have the eight-time World Champion set up well for round 16.

Like his Repsol Honda Team teammate, Pol Espargaro is eager to return to the circuit after two weeks away and put what he learned during the post-race test to use. Espargaro earned a solid seventh place finish on his previous visit to Misano and is aiming for more after a productive two days testing at the Italian circuit. With tenth place in Austin, Espargaro has so far taken eight top-ten finishes in his debut season for the Repsol Honda Team.

As always, the weekend will begin at 09:55 Local Time on Friday, October 22 with Free Practice 1, with the Gran Premio dell’Emilia-Romagna getting underway at 14:00 on Sunday, October 24 and running over 27 laps.

“We come back to Misano in a better situation, each weekend we have been able to improve a little bit more. Now we start the last three races of the year so hopefully we can continue the trend of recent rounds and end the season well. Last race here I had a very funny battle with Miller and Mir so hopefully we can be fighting once again. Let’s see what will happen, conditions could be quite different even if it’s just a few weeks later.”

“It’s time to focus and end the season with a strong last three races. There’s some good potential going into Misano, especially after the test where we were able to try more things. Everyone else has also had a lot of time in Misano so it’s going to be a fast weekend from the start but I think going there a few weeks later could change the situation with the temperature and the weather. Like always, we need to work from Friday and have a good Saturday to be in a position to fight on Sunday.”