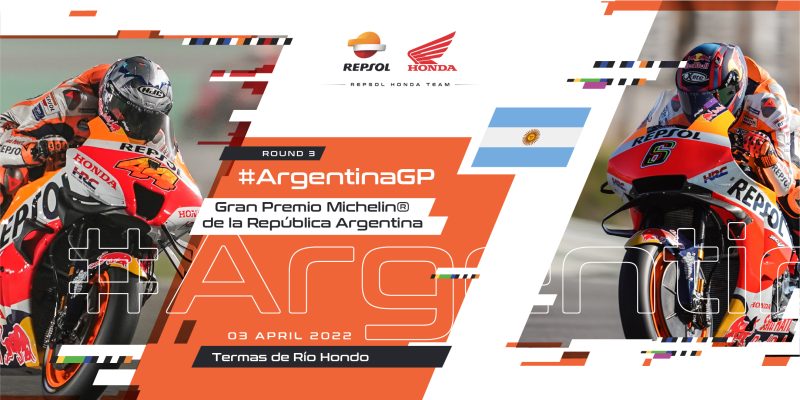 Stefan Bradl will ride in place of the recovering Marc Marquez after his Indonesian GP fall as Pol Espargaro aims to show his and the Honda’s true pace.

For the first time since 2019 the MotoGP World Championship will return to Argentina and the Termas de Rio Hondo circuit. The 4.8-kilometer-long track has produced some thrilling races over the years with the final corners on track a particular hotspot for overtaking action.

Having started the season in incredible form, leading 17 laps and taking a well-earned podium finish in the opening race, Pol Espargaro sits just 10 points behind MotoGP World Championship leader Enea Bastianini. Enduring a challenging Indonesian GP, Espargaro’s determination has not relented and the #44 is as motivated as ever to continue his 2022 challenge. Having raced in Argentina since 2016, Espargaro has never finished outside of the points and holds a sixth-place finish in 2016 as his best result to date. With a two year break between visits, getting back up to speed with the Argentine circuit will be the first order of business of the weekend.

The other side of the Repsol Honda Team garage will see Stefan Bradl return, the HRC Honda Test Rider set to replace Marc Marquez in Argentina as the eight-time World Champion recovers after his heavy Warm Up fall. Bradl is familiar with the new Honda RC213V having completed multiple tests with the bike already in 2022. The German Test Rider is on a run of nine-point scoring finishes in a row in the MotoGP class and has a best finish of fifth in Argentina.

Since its return to the Grand Prix calendar in 2014, Honda have won four of the six races held in Argentina.

“I am looking forward to getting our season back on the right line after a difficult weekend in Indonesia, what has happened is in the past and now we focus on the future. We are close to the top of the championship and the objective is to put together a weekend like in Qatar. I have had some consistent results in Argentina in the past and we know what the Honda this year can do. It’s time to keep working and show our potential.”

“The most important thing is sending my best to Marc and hoping that he recovers quickly. Until then, I will do my best for Honda HRC and the Repsol Honda Team in his place. I have already done a few tests this year so I am familiar with the new Honda RC213V but of course coming into a MotoGP weekend is a different situation. I have some good memories of Argentina; I was fifth there in 2014 and seventh there when I last raced in Termas in 2016. We will work with the team to define the plan for the weekend, I have no doubt it will be a busy one.”