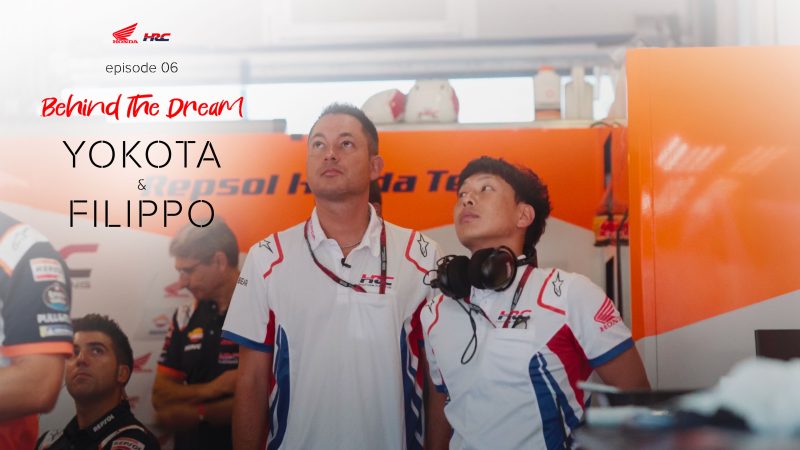 From Japan to Italy and beyond, HRC’s staff span the globe in the quest to constantly go faster. A World Championship requires a global team and Honda’s efforts have produced a unique mixing pot of people, cultures, languages and time zones. The pairing of Yokota Yuta, Software Engineer, and Filippo Tosi, Electronic Engineer, are a perfect representation of the advantages, and the challenges, of a worldwide approach.

Tosi, a 40-year-old Italian originally from Milan, has always had a love of technology and computers which paved the path to arrive where he is today. For Yokota-san, his journey began as a medical engineer before a talent scout stepped in. “A Honda talent scout was looking for engineers from a wide range of fields so, I applied to be a motorcycle engineer at Honda,” he remembers as he now splits his time between working in the factory in Japan and joining the World Championship at the track.

“We can work until night, you work in the morning when we sleep”

Working in both Japan and Europe produces a constant working day for HRC. “My typical day starts quite early. In the end, it’s due to the time difference that we have with Japan. Because the morning is dedicated to communicating with Japan, to speak with and send emails to Yokota-san,” outlines Tosi on how he maximises the advantages brought by the time difference. When not at the track, Yokota-san is also able to take profit from the ‘night shift’ and Honda’s facilities: “We have a facility nearby that can check the dynamo software so I can immediately try it out. Try the ideas I’m working on and of course I communicate with the European engineers and with Filippo and share the results of the dynamo tests.”

“If Soichiro Honda were here now, he would do the same thing as we are doing”

Across the languages, cultures and time zones there is one thing which unites everyone inside HRC: the philosophy of Soichiro Honda. The Honda Philosophy consists of Fundamental Beliefs (including “Respect for the Individual” and “The Three Joys”), the Company Principle, and Management Policies. Driven by its dreams and reflecting its values, Honda will continue taking on challenges to share joy and excitement with customers, communities and fans around the world. This is the principal and the guide which everyone works to in the quest to return to the top step of the podium.

“I really believe this is something from another world”

With such close contact to the riders and their data, engineers in positions such as Filippo and Yokota-san have a unique insight into what makes them, and especially Marc Marquez, so special. “For me, Marc is incredible, I mean apart from being such a fast rider. Sometimes after a run on track I can see him take a sheet of paper, a pen and write the telemetry on the paper. For me it’s already something incredible that he can feel so many things. Then when I go back to the laptop, I check the numbers and it’s exactly like he said. So I really believe this is something from another world.”

Behind the Dream: Yokota and Filippo