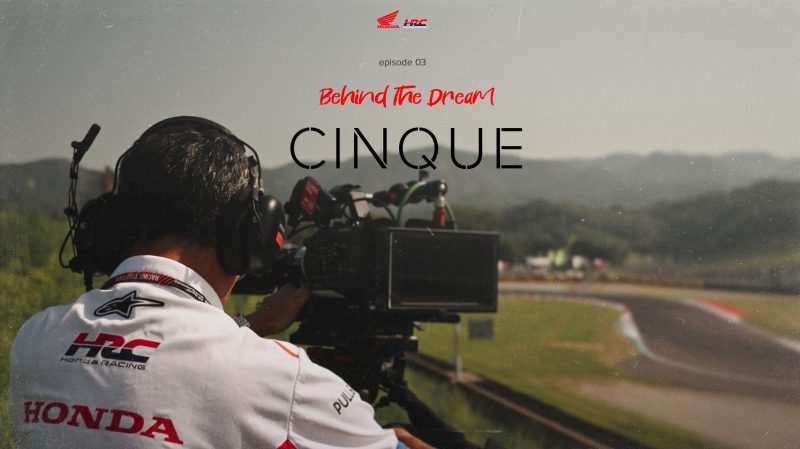 “In the past, five years ago, it was a secret!” This is how Marc Márquez reveals the figure of the Video Analyst as uncovered on the latest installment of Behind the Dream.

A fundamental part of the quest for performance, the Video Analyst has become even more critical as manufacturers and riders hunt the final tenths of a second on track. Still a relatively new area in the grand scheme of Grand Prix racing, Video Analysts are now a common sight dotting the hills and corners of each and every circuit.

Motohiko Tono is possibly, alongside Marc, the member of Honda HRC who can most often be seen laughing and smiling during the weekend and since 2019 he has been in charge of video analysis for the team. Studying economics in university and arriving in Europe as a World Superbike mechanic, ‘Cinque’ has followed a unique path in life. Identifying the huge potential of video to help teams and riders improve, he taught himself everything he needed to know about filming and video editing and began to work. A decade of dedication and refinement later, Tono-san has become the embodiment of his craft.

“I never thought I would work in Honda”

“It was a big surprise when HRC called me, I never thought I would work in Honda”, says the Shiba-born man who everyone in the paddock knows simply as ‘Cinque’ due to his fondness for pasta. His meticulous attention to detail is required to assemble and disassemble his state-of-the-art filming equipment before and after each session of the day. But filming is just the beginning of his work as he then locks himself away for hours, editing and analyzing the day’s work to help HRC’s performance.

“In five seconds you understand the problem”

With data, and crucially video evidence in hand, Cinque is uniquely positioned to help the riders understand where they are gaining and losing time on their rivals. “Sometimes you see something on the data, but you just see a line. When you see data, you can talk for an hour about it. But when you see even one image, in five seconds you already understand the problem,” reflected Marquez on the impact this kind of video has had.

Behind the Dream: Cinque