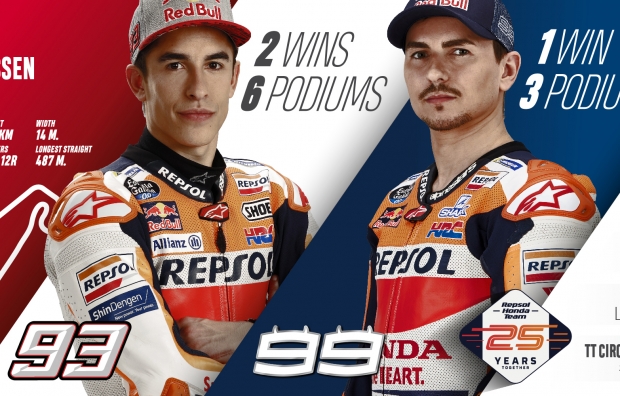 With an extended championship lead and a successful test, the Repsol Honda Team arrive in Assen with clear goals.

Known as ‘The Cathedral’, Assen is steeped in history as the only circuit to have hosted a round of the World Championship every year since 1949. The fast and flowing nature of the 4.5km long circuit has traditionally produced some of the most exciting races of the year.

Reigning World Champion Marc Marquez arrives with a comfortable margin over his title rivals, but knows he can’t relent for a second. Fortunately, Marquez has an impeccable record in Assen having finished on the podium in each of his six premier class starts. A positive and productive post-race test in Barcelona allowed Marquez and his Repsol Honda Team to assess a number of future options and potential setup changes to benefit them in Assen and beyond.

For Jorge Lorenzo, the TT Assen represents a chance to once again demonstrate the speed he showed in the opening laps of the Catalan GP. An ever-improving feeling with the Honda RC213V is bringing Lorenzo closer and closer to the front of the field. Time between the test and next round of the MotoGP World Championship has allowed Lorenzo to fully recover from his crash during testing.

Honda will also celebrate their 60thracing anniversary over the course of the Assen TT weekend. A number of legendary bikes and riders will be on display and in attendance over the weekend, including a special press conference on Friday.

“Assen is a circuit where you need to be very precise and it’s difficult to be consistent there. To be strong in the fast change of directions is really important to go well at Assen. I’m looking forward to racing there again as we have had some good battles in the past and have put on a great show for the fans. I am sure we will have a great race on Sunday. The weather is also looking good so I am confident we can have a strong weekend.”

“We come here after our most consistent weekend of the year in Barcelona. The end result was not as we wanted but all weekend we were able to be competitive and keep improving the bike, this is what I want to do again this weekend. If we continue to work in this way with the Repsol Honda Team, we can again have the speed like we did in Barcelona.” 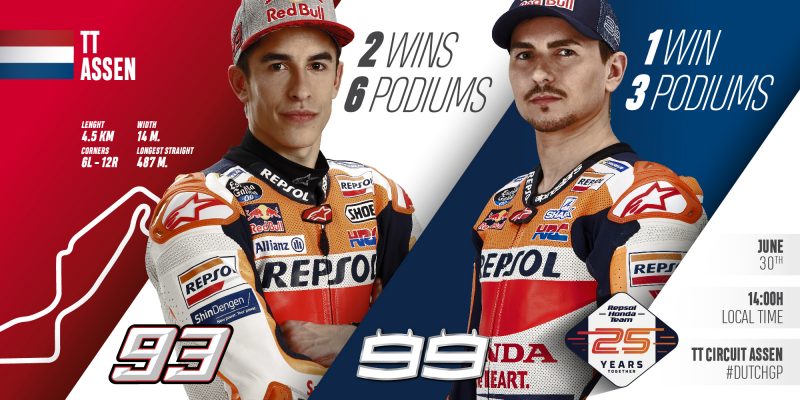