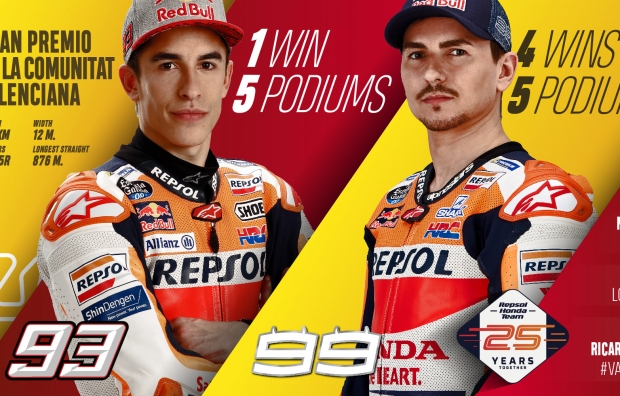 The Repsol Honda Team have just one goal left to achieve in an incredible 2019 season: taking the Team Championships and completing the Triple Crown.

Leaving behind the high heat and humidity of Malaysia, the Repsol Honda Team arrive at the tight Circuit Ricardo Tormo in Valencia with the ambition of ending the season on a high. Having featured on the top two steps of the podium in all but one race this year, just two points now separate the Repsol Honda Team (430) from Ducati Team (432) as they seek a third straight championship lockout in the premier class of Grand Prix motorcycle racing. With a maximum of 45 points on offer from the final round, the Team Championship is still wide open.

After celebrating his fantastic 2019 MotoGP World Championship and his brother’s Moto2 World Championship at home in Cervera, Marc Marquez’s motivation remains as high as ever. Having never finished a MotoGP race in Valencia off the podium, the eight-time champion has history on his side as he chases a 12th win from 19 races in 2019. With the all-time premier class points record already in hand, Marquez has the opportunity to become the first rider in history to score over 400 points in a single season.

Returning to the points for the third time since his injury in Assen, Jorge Lorenzo is determined to end the season with another positive result. Ultra-consistent lap times throughout the Malaysian race were the biggest take away from the flyaways for the number 99. The scene of his 2015 World Championship, Valencia has seen Jorge Lorenzo take victory on four occasions.

The 27-lap Valencia GP is scheduled to start at 14:00 Local Time on Sunday, November 17. There’s little time to rest after the race as testing for the 2020 MotoGP season begins on Tuesday at the Valencia circuit.

“First I want to say thank you to everyone who came out to celebrate in Cervera, it’s always very special to do this party and to have my brother alongside me as World Champion again was really magical. Now we return to work. We have the objective of winning the Team Championship in Valencia, but also we are looking to 2020 already and continuing to try some options while we have this time before we go into test mode after the race. We will try to put on one more really nice show for the fans before winter!”

“Valencia is a circuit that is quite different to the ones we have been racing at. It is very tight compared to the likes of Phillip Island and Sepang and it can sometimes be quite cool, especially in the morning and this is something we must pay attention to. After a more positive race in Malaysia, I am striving to continue making these gains and do everything I can to help the Repsol Honda Team win the Team Championship.” 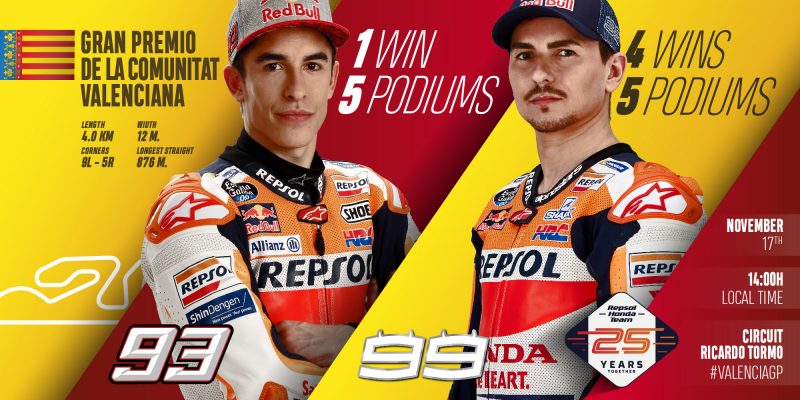