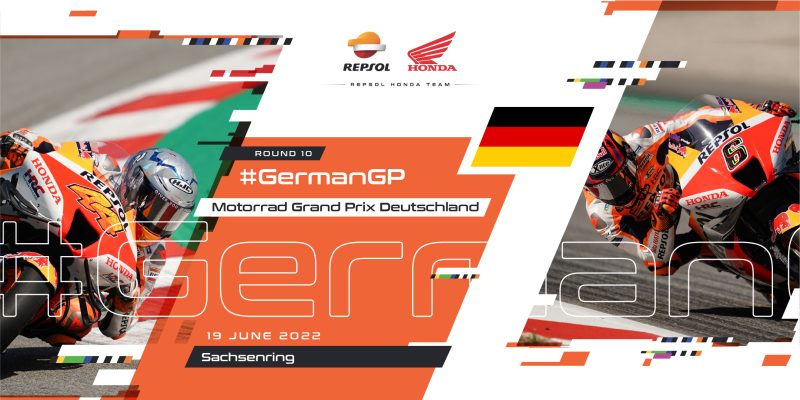 A historically successful circuit for the Repsol Honda Team, Pol Espargaro and home hero Stefan Bradl will be hoping to recapture the RC213Vs past performances in Germany after a tough run of races.

Since 2010, the Repsol Honda Team have been the undisputed rulers of the Sachsenring with dominant victories each year. Dani Pedrosa won the 2010 to 2012 editions before Marc Marquez joined the premier class and proved beyond doubt that he was the King of the Ring with eight straight wins in the premier class. 2021 was perhaps his most emotional victory as he returned to the top step of the podium some 581 days after his last win. Unfortunately, Marquez will not be in attendance this year as the King of the Ring continues his recovery from a fourth right arm operation at home in Spain.

Thoughts of a heartbreaking home GP were put to rest for Pol Espargaro with a busy and productive test on Monday, this knowledge spurring the #44 on for another attempt in Germany. Steady results inside the top ten, including a tenth last year aboard the Honda RC213V, mark the German track as a consistent one for Espargaro but he’s aiming to make another step this year. The tight layout of the Sachsenring presents a new challenge compared to the previous two rounds in Mugello and Barcelona.

As the only German rider on the premier class grid, there will be a lot of attention on Stefan Bradl as he enters his third race with the Repsol Honda Team. Bradl last raced in front of his home crowd in 2019, filling in for the injured Jorge Lorenzo, and earned an impressive tenth place finish. His best result in the premier class at home stands as a fourth place, achieved in 2013 when riding the LCR Honda.

“After a really busy test on Monday, it was good to have a week away from the races to focus on my physical training. We now arrive in Germany for the tenth race for the year, a circuit where Honda has had a lot of success in the past. Our situation this year is a little different but I am here to keep giving my maximum each time we go out on the bike. Let’s see what happens this weekend, the weather is looking quite warm and it looks like the stands will be full, which is of course always great.”

“I’m looking forward to riding at the Sachsenring again, it’s always a pleasure to ride in front of the German fans. It has been a few years since I last rode there but the memories I have of 2019 are very good, we put together a strong race at short notice. Now everything is much closer in MotoGP and we have some other plans to focus on. No matter what, I want to put on a good show for all the fans who come out to see us. Los geht’s!”