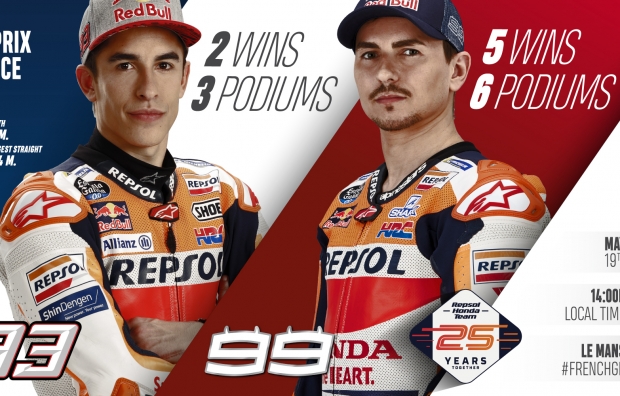 The French GP will offer Honda the first opportunity to take win number 300 in the premier class as Marquez looks to extend his lead and Lorenzo prepares to bounce back.

With a dominating start-to-finish victory, Marc Marquez banished his Austin demons at the Spanish GP to walk away with 25 points and the lead in the MotoGP World Championship standings. The Le Mans Circuit has offered the Repsol Honda Team rider somewhat mixed results in the premier class with two wins and a total of three podiums to his name. Maintaining momentum and continuing to build his points lead is the reigning champion’s primary objective for the weekend.

Jorge Lorenzo arrives in France looking to build on what he and his Repsol Honda Team found during the post-race test. Despite a challenging weekend in Spain, Lorenzo and his crew remain hungry to improve their results on the RC213V. With five premier class victories to his name at Le Mans, Lorenzo has proven speed around the 4.2 kilometer long French circuit.

Victory at the French GP for one of the four Honda RC213V machines of Marquez, Lorenzo, Crutchlow or Nakagami will mark Honda’s 300th premier class win, a 53-year journey which began with Jim Redman’s first win on the RC181 in 1966.

Lorenzo’s French GP starts a little early with a special trip to Paris before Free Practice 1 starts at 09:55 local time on Friday, May 17. The race will take place at 14:00 local time on Sunday, May 19.

“We had a very strong weekend in Jerez and a productive test but this is MotoGP and we must always keep working. Between races I was able to relax a little bit at the F1 and also the Leipzig versus Bayern game, riding my bike in the stadium was great and the noise was incredible. Le Mans can be a tricky GP, especially with the weather so we must be prepared for any conditions. Last year I was able to win here but we always face a lot of opposition.”

“After a tough weekend I am pleased to be able to get back on the Honda without too much time between races. In the past, I have gone well in France but we will need to see how this weekend goes. The test we had on Monday after Jerez was productive and importantly I was able to get more time on the bike which should help us to understand and improve.” 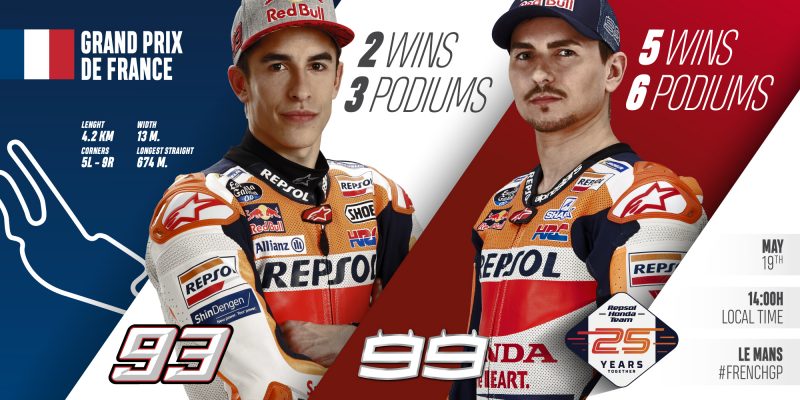