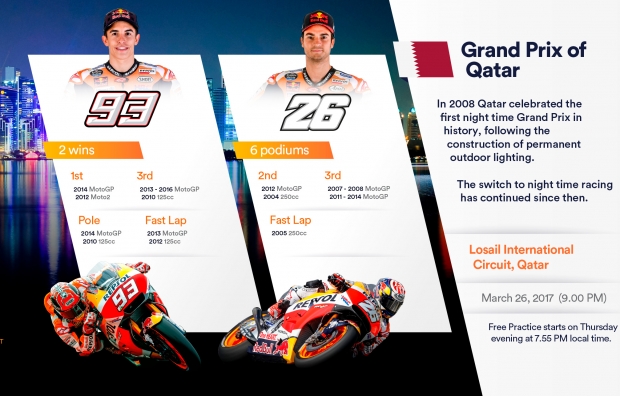 Defending World Champion Marc Marquez and teammate Dani Pedrosa have arrived at Losail for the opening race of the 69th FIM MotoGP World Championship season. The only night race on the calendar and the only event to feature three days of practice, the Qatar GP will see the MotoGP FP1 session start at 7:55 p.m. on Thursday, with the race starting at 9 p.m. on Sunday night.

Following a promising preseason during which they worked on development of the RC213V in Malaysia, Australia, Jerez and finally in Qatar itself two weeks ago, Marc and Dani look forward to the first race of the year and are prepared to do their utmost to achieve the best possible results on Sunday.

At the Qatar GP

“The first race of the season is always a special one because you’re a bit more nervous than usual! The Qatar track is also one of the most special circuits on the calendar and one of the main things to consider is the sand, which can make the surface quite slippery as soon as you get out of the best line. The limit is very narrow. There are three very strong braking points and you need good front stability. Maybe it’s not one of the best tracks for my riding style, but I like it and we have worked very hard during the preseason to find a good rhythm and a good base setup for all circuits. From a technical point of view, we’re starting this Championship better than the last one, and although that doesn’t automatically mean that the results will be better, I think our machine has reached a level to fight for the podium. We’ll try to manage well from the beginning on Thursday.”

“We worked well with the team during the entire preseason, including the last test here in Qatar, and little by little we improved our bike and our performance. There are still things we want to improve here and there but they never stop working in Japan, and we’ll also do our best to continue in a good direction. The track is very dusty and the place is quite windy, so the grip is generally not very very good. There’s a long long straight where we typically have a headwind and therefore you need a strong engine. It’s difficult to make any predictions for the race as the level of competition is very high, but we’re about to start the weekend with good confidence and the desire to do our best.” 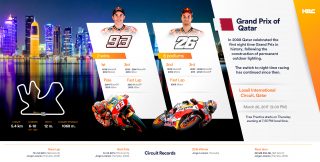 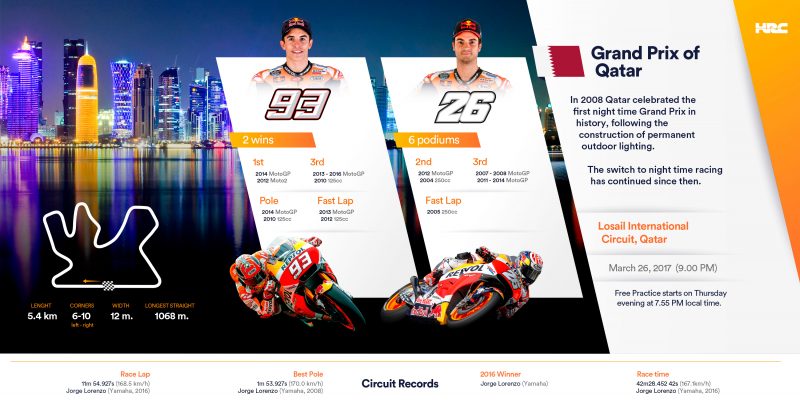