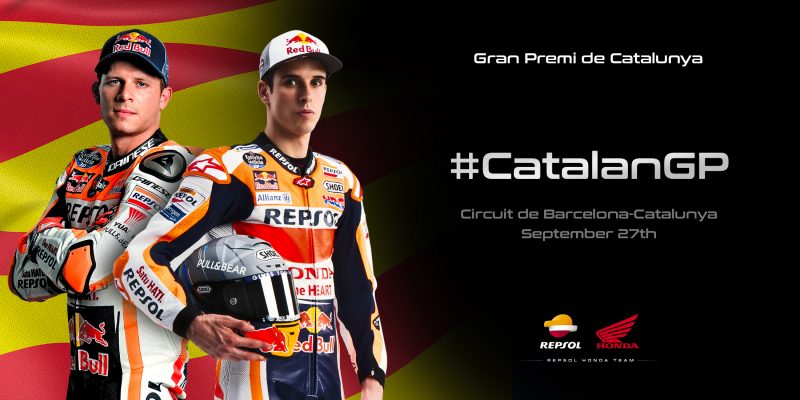 With the best result of his rookie season to date, Alex Marquez is aiming to carry the momentum home as Stefan Bradl rejoins him in the Repsol Honda Team garage.

The MotoGP World Championship continues to roll on with the third race in as many weeks. Round nine of the 2020 season takes place at the Circuit de Barcelona-Catalunya, the home race of Alex Marquez and the Repsol Honda Team. This 4.6-kilometer circuit, located just outside Barcelona, has become a mainstay of the MotoGP calendar. In 2019, Marc Marquez dominated the weekend aboard the Repsol Honda Team RC213V.

Alex Marquez arrives at home fresh from his career best premier class finish, seventh, in Misano. The MotoGP class rookie took huge benefit from a day of testing between the two races in Italy and arrives at home in the best form of the year. Improving his one lap pace for Qualifying remains Alex’s primary objective, having now shown the pace to battle for the top ten against veterans of the MotoGP class.

Meanwhile, Stefan Bradl has benefited from a week of rest after missing the Emilia Romagna GP due to right arm issues. The German will return to the Repsol Honda Team as he continues to replace the recovering Marc Marquez. With two top five finishes and an eighth on his three previous visits to the Barcelona circuit while riding the LCR Honda, Bradl has shown strong pace in the past.

“We arrive in Barcelona in a good way after our best result so far. I am happy with the progress we have made, and I am looking forward to riding in Catalunya with the Honda. Of course, it will be a different experience to normal and I will certainly miss seeing all the home fans in the stands because this is always a special feeling. Hopefully we can put on a good show for everyone so they can enjoy the race like they were here! The last three years I have taken two wins and a podium here, I enjoy the circuit a lot.”

“My arm is feeling much better, it was a hard decision not to race in Misano but it was the best one for me and everyone else. Now with a week of rest I am feeling good and motivated to return. I have had some good results in Barcelona in the past on the Honda but we need to see where we are this year. Alex and Taka both had great tests and races in Misano, I look forward to helping them and HRC continue to improve.”