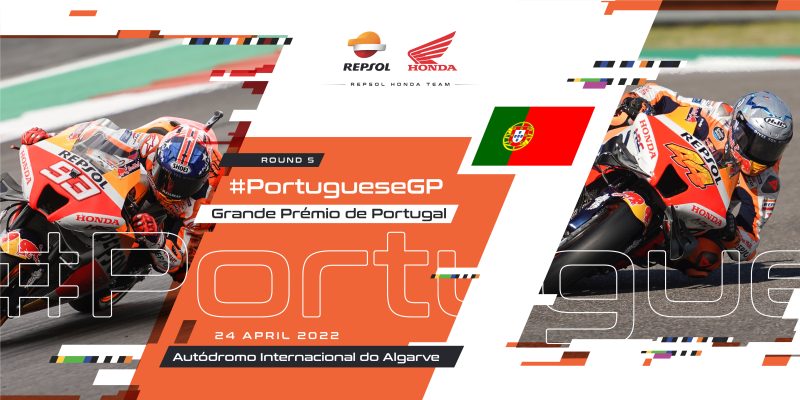 After four helter skelter opening rounds, Marc Marquez and Pol Espargaro are searching for consistency and calm in Portimao.

The Autodromo Internacional do Algarve in Portugal will open the European leg of the 2022 MotoGP World Championship season. So far it has been a year which has been anything but predictable and the Repsol Honda Team are aiming to take back control. This will be the fourth race held in Portimao since the circuit joined the calendar in 2020, each edition has so far produced a diffrent winner.

In 2021, Portimao marked the return of Marc Marquez to competition after his 2020 injury. He then put on a heroic performance to ride to seventh while still recovering. In 2022, the eight-time World Champion has his target set higher as he looks to put together a weekend without issues or complications. The Americas GP proved without any doubt that Marquez’s incredible speed has not gone anywhere, and he will be a threat at each and every round. Having missed the Algarve GP due to injury last year, seventh place stands as Marquez’s best premier class finish in Portugal.

Marquez arrives at round four with 21 points, 40 points shy of the World Championship lead.

The Americas GP was a punishing weekend for Pol Espargaro who was struck down by illness, salvaging 13th place after a grueling ride. Upon returning home, Espargaro spent several days focusing on his recovery before returning to his normal training regime. Now Espargaro arrives in Europe with the aim of getting back to normality, finding his rhythm and building his challenge over the weekend. In 2021, the two races in Portugal highlighted the great progress made by the #44 on the Honda RC213V – DNF in the first race and sixth in the second edition. From his two visits to the circuit, Espargaro has never finished lower than sixth and has an eye on improving on his best result of fourth.

Espargaro sits 11th in the World Championship, 38 points from the top.

“I am looking forward to riding in Portugal, it’s a demanding circuit that’s very physical but a lot of fun to ride. In America we showed our speed and what we are capable of, even if everything did not go perfectly. I want to again be fighting at the front and getting good points after not the best start to the year. We have to keep working on ourselves and the bike to be able to achieve our maximum, but I know myself and Honda are working hard.”

“With the come back to Europe I’m hoping to reset a bit and find what we had at the start of the year. After Qatar it seems things have been against us a little bit, but there are still plenty of races left and a lot of work to be done. Portimao is a circuit I have always enjoyed so with the new Honda I have some good hopes for the weekend.”