Marc Marquez took very important points with a fifth-place finish in today’s Austrian GP. At the line, he trailed his main rivals for the title chase, Jorge Lorenzo and Valentino Rossi who ended third and fourth, respectively, behind the two Ducatisti who topped the podium. Dani Pedrosa was able to keep a good pace for the entire GP and recovered from 12th on the grid to seventh at the chequered flag.

Marc, who was nursing a bruised shoulder after suffering a heavy crash in yesterday’s FP3, got a good start and entered the first turn in third but ran wide and found himself in fifth at the end of the first lap. He closely trailed the front group for over half the race, controlling Maverick Viñales behind him, but after a couple of small mistakes, he progressively lost ground and wisely settled for a top-five position.

Dani entered the first corner in 10th and overtook Scott Redding for ninth before the end of the first lap. He then kept a good rhythm until the end of the race, not so far from the front riders. Along the way, he recovered several more positions and improved his feeling with the bike.

Heading to the next race in Brno in one week’s time, Marc leads the championship with 181 points, 43 over Lorenzo and 57 ahead of Rossi. Dani is fourth with 105 points, 33 behind the runner-up position in the standings.

“After how yesterday went, I’m happy with today’s race. My shoulder didn’t hurt at any time during the race, so no excuses there. I would have taken fifth position if it were offered to me before starting the race. I knew the Ducatis and Yamahas were fast, so this was the best possible outcome and it’s positive that we’ve only lost five points compared to Lorenzo. Given the difficulties we’ve had, it was clear that our objective was to think of the fight for the Championship. I started aggressively, as it was the only way of trying to fight with the front group, but after making a couple of mistakes I lost the slipstream and it was very difficult to recover from that.”

“We went better in the race compared to the practice sessions, as we were putting in similar times to the riders at the front. We had been a little farther away from them beforehand this weekend, but today we took a step forward and that’s a positive. Now we must carry on working to continue to progress at the next race, which will be next weekend in the Czech Republic.” 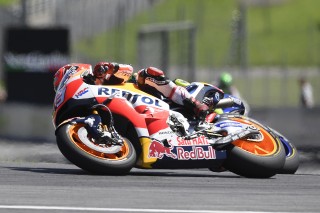