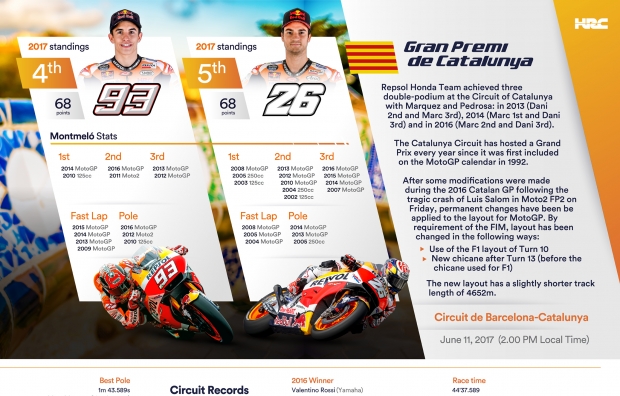 With no rest after the Italian GP, the Repsol Honda Team have arrived in Spain in anticipation of this weekend’s Gran Premi de Catalunya.

In the year following Luis Salom’s tragic crash in Moto2, some permanent changes have been applied to the circuit for the MotoGP event that both Marc Marquez and Dani Pedrosa had the chance to verify during a one-day test on 24 May.

By requirement of the FIM, the F1 layout will be used at Turn 10, and a new chicane has been introduced after Turn 13 (before the chicane used for F1). The new layout has a slightly shorter track length of 4,652 meters (previously 4,655 meters).

At the Gran Premi de Catalunya:

“I’m happy to get back in action soon and to do it at Catalunya, as racing at home in front of all your fans always gives you an extra boost! In Italy we managed the situation as well as possible, but we must do better. We have to be able to remain more consistently at a good level. The test we did at Catalunya some days ago actually went well enough. We did a lot of laps, improving the bike’s setup over the day, so we’ll try and build on that beginning on Friday. As for the changes made to the track, I think they’re interesting and quite challenging to interpret well. The speed and the corners on the rest of the circuit are all similar, while in that sector they’re now quite different. But honestly, the layout is so particular that I like it!”

"I’m looking forward to going to Montmelò as I like the track a lot and of course the atmosphere with my fan club and all the fans is always amazing! We will work hard to get back to the level we were at before Mugello and try and make good use of the information we gathered during the test we had at Montmelò in May, which was quite positive. Besides working on the setup, during the test we had the chance to try the new chicane and the modifications carried out to the layout which is more tight than before in that sector, even if the lap times are similar to the past. The surface is really bumpy and that also will be a factor to take into account. We are ready to give our 100% to get a good result!”. 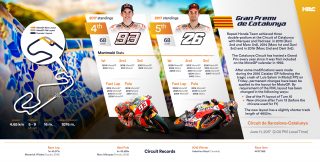 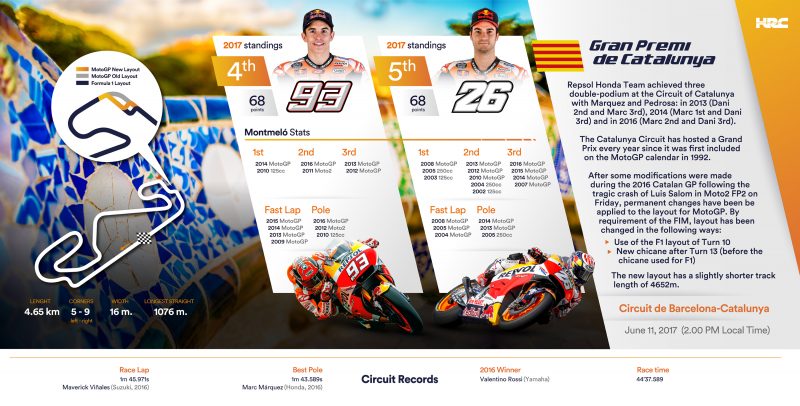