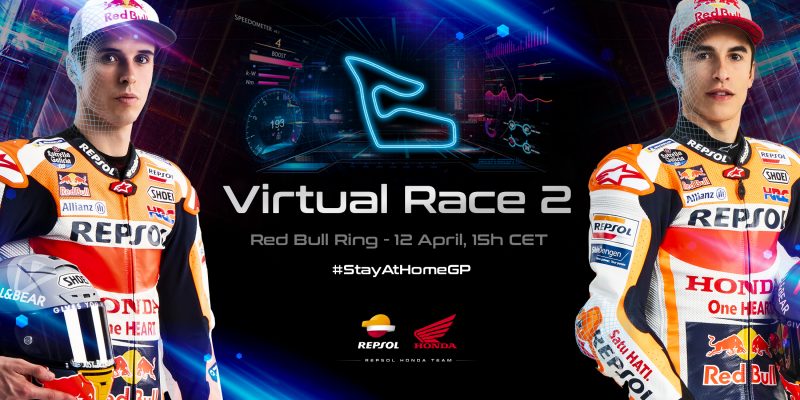 After a strong start in the first #StayAtHomeGP, both Repsol Honda Team riders have been honing their skills to impress again at round two on Sunday.

Alex Marquez was almost untouchable at the Mugello circuit as he ran away with his maiden win in the #StayAtHomeGP series last time out. The Moto2 World Champion is keen to continue his momentum into the second event as a number of new competitors enter the second race hosted at the Red Bull Ring in Austria.

With a solid fifth place under his belt in the opening race, Marc Marquez has continued his training at home to bring him closer to the top three. The reigning MotoGP World Champion has three podium finishes to his name at the Red Bull Ring and is looking to use a few of his real-life tricks when the lights go out on Sunday.

As with the previous race, riders will work through a Free Practice session before a brief Qualifying shoot out. The ten-lap race around the Red Bull Ring will follow directly after with coverage starting at 15:00 CET on Sunday, April 12.

“It will be nice to put on another show, but I think lots of the others will have been training harder! I’ve been practicing again at the Red Bull Ring, it’s quite different to Mugello with a lot of heavy braking. In Mugello we saw a lot of people were on the limit, so I think Turn 1 of the race could be very exciting! It will be interesting to see how everyone has improved, but I still think Pecco and Fabio will be a big challenge.”

“Well, since the last race I have stepped up my training a bit more. When you’re a racer you want to win no matter what you are doing but most importantly this is for the fans. It’s nice to have something else to focus on alongside physical training. Everyone seemed to really enjoy watching it last time so it should be another funny race. Let’s see what happens at the Red Bull Ring!”