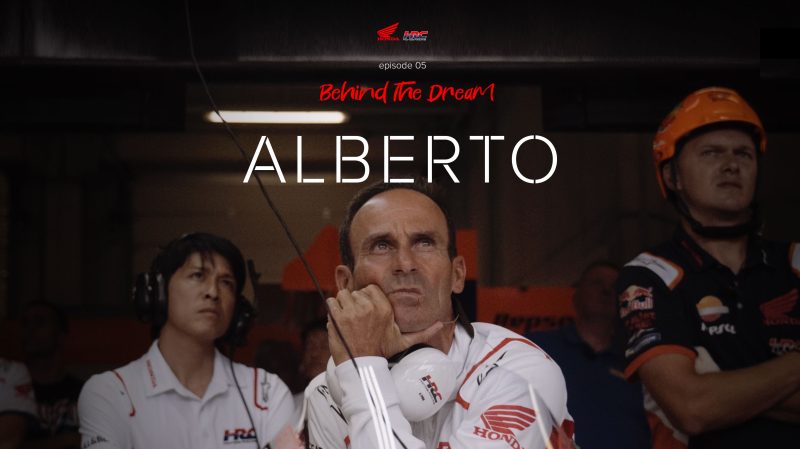 “It cannot be the end for me…”

This is Alberto Puig, who is honest about what he was and what he has become since the ordeal that changed his life. Rider, manager, talent spotter and now Team Manager – a man who has never given up and continues to work for constant progress within the team that he leads. In the fifth edition of Behind the Dream, the penultimate episode of the season, we learn about Puig’s past, his motivations and the mentality required after three painful seasons for the Repsol Honda Team.

Born in Barcelona 55 years ago, his life has revolved around motorcycles. His father, very passionate about two wheels, bought him a Honda Monkey 50cc. “I liked to ride and I was lucky that I was good at it,” then he started competing at the age of seven and in 1995 would became the first Spanish rider to win a 500cc race on Spanish soil. Now he has been followed by the likes of Crivillé, Pedrosa, Lorenzo, Márquez and many other Spanish riders who have come to fight for and claim home victory, but that Sunday in 1995 in Jerez will go down in the history of Spanish motorcycling.

“I really don’t know how I crashed”

A serious crash in Le Mans just four races later, followed by many complications and operations forced him to follow another path in life and ended the dream he initially had. “I was too fast on that corner, but I really don’t know how I crashed,” he reflects about his accident. There he began the second part of his life in motorcycling, a stage to which pain and suffering were permanent companions, but they have not been able to defeat him, instead of hating this sport, he decided to turn the page and begin a new chapter.

“Chapter two of my story”

“I cannot ride, but I can help people to ride, try to help young guys to do this activity.” And so this new chapter began with the Movistar Activa Cup project, which would lay the foundations for a new generation of Talent Cups organized by Dorna Sports, such as the Asia Talent Cup and the British Talent Cup. It produced many riders who would come to the World Championship and be consistent front runners, but two great champions in Dani Pedrosa and Casey Stoner stand out from this period.

Puig is not one for sharing his emotions frequently, but he admits that with these riders he has been moved many times. “You get emotional sometimes, especially when you work with young kids.” Pedrosa and Puig became closely linked, writing a long and successful story as his manager, winning three 125cc and 250cc World Titles and 31 MotoGP victories.

“Alberto is crucial because he is honest”

“The people can speak bullshit about Alberto, but to me he is crucial. Crucial because he is honest. When someone is honest and speaks straight to you, normally this person has not a lot of friends.” This is how Marc Marquez describes the figure of his controversial boss, who has been of great help to him at all times since breaking his humerus at Jerez in 2020. “I am connected to his problem,” Puig empathizes.

The eight-time MotoGP World Champion has always appreciated the advice of Puig and Mick Doohan, former riders who have lived through the hell of injuries and who have motivated him during the long road of recovery that he emerged from at the last Aragon Grand Prix.

“I am not pretending to be the guy that everybody loves”

But Alberto does not limit his motivational efforts to just ‘his’ rider, but also his entire team. In a difficult period for the most successful team in Grand Prix racing, many have casted doubts that the Repsol Honda Team will return to where it has historically been. Alberto’s philosophy on the situation is pragmatic and simple: “If you pretend it’s going to be paradise you don’t understand this racing field. We had very good years and we are suffering. How do I handle it? I just handle it.”

This is Alberto, a man entirely focused and consumed in his work and completely unconcerned by the opinions of others. “I am not pretending to be the guy that everybody loves. I am not acting in my life. How people see you is something you cannot control. And frankly, I don’t care.”

Behind the Dream: Alberto