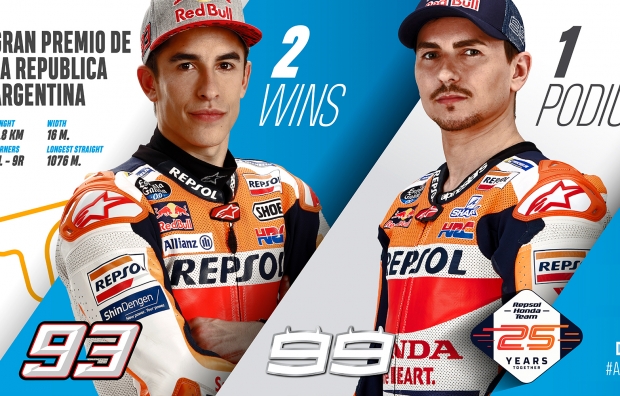 With the first race of 2019 under their belts, Repsol Honda Team riders Marc Marquez and Jorge Lorenzo are ready to continue building.

Joining the calendar in 2014, the Argentina Grand Prix at the Termas de Rio Hondo circuit is one of the longest races in the championship at over 120 kilometres across 25 laps. Characterised by multiple long staights, demanding left-hand corners and often-unpredictable weather, the race has produced five different premier class winners in six years.

Opening his 2019 MotoGP™ World Championship campaign in an almost identical fashion to 2018, Marc Marquez battled Andrea Dovizioso until the line in Qatar. Walking away with 20 points, the reigning MotoGP™ World Champion began his title defense with a solid result. Now awaits the Termas de Rio Hondo circuit where Marquez has achieved two wins previously, the only premier class rider to win there more than once.

For Jorge Lorenzo, the Argentina GP will be about continuing to learn and adapting to the Repsol Honda Team RC213V. After a physically punishing weekend, where it was later revealed he had sustained a fissure to one of his ribs, Lorenzo and the team are aiming for a smooth weekend to again unlock the potential shown on Friday in Qatar.

The weekend begins at 12:00 local time with the pre-race press conference where Marc Marquez will once again be in attendance. On track action starts on Friday, March 29 at 10:50 Local time with Free Practice 1, lights going out on the race at 15:00 local time on Sunday, March 31.

“We started well in Qatar and fought until the end for victory. The goal is of course to do the same in Argentina and take as many points as possible. Time between the two races has been good, I was able to return training with a motocross bike and I feel confident for this race.”

“Despite not finishing where we wanted, Qatar showed that we have a lot of potential with the Honda. Argentina will give us a chance to continue to improve on the bike. I have been focusing fully on my recovery between races, the wrist is feeling better and the pain in my ribs has also improved a lot since the race. In the past Argentina has not been one of my strongest circuits, but the Honda presents a new opportunity.” 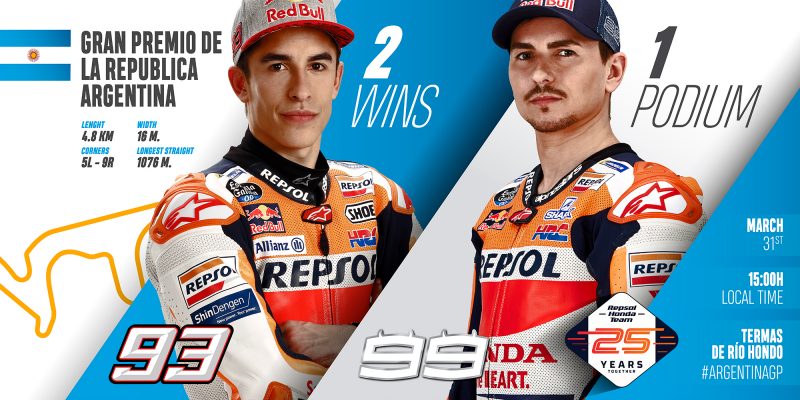