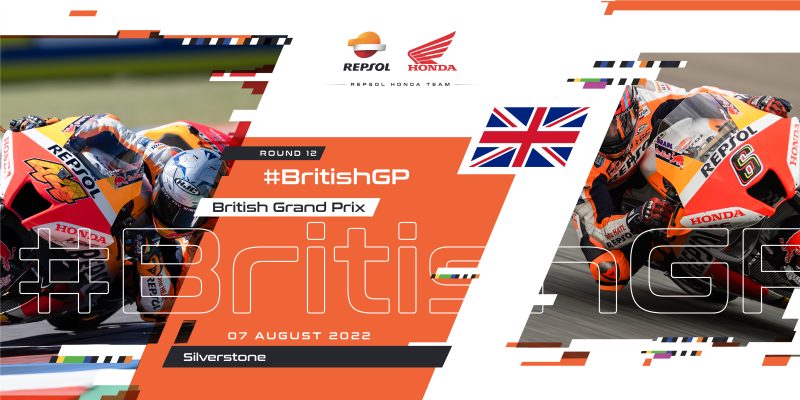 The Repsol Honda Team will be back on track for the British GP after a restful Summer Break, Pol Espargaro targeting past Silverstone success and Stefan Bradl eager to get back to racing.

After five weeks away from the circuit, the time has come for the MotoGP World Championship to return to action at round 12 – the British Grand Prix. At 5.9 kilometres long and with eight left and ten right hand corners, Silverstone is the longest circuit on the calendar and has a habit of producing thrilling last-lap battles. Over the years it has seen Marc Marquez battle the likes of Jorge Lorenzo and Alex Rins down to the final corner – a treat for fans.

Pol Espargaro holds very fond memories of the British track after claiming a sensational pole position there in 2021, his first with the Repsol Honda Team. This result marked a turning point in his 2021 season as he and the RC213V were then able to make a clear and consistent step. The aim is to recreate this waypoint in 2022 after a run of difficult races due to crashes and injuries. Having fully recovered after his fall in Germany, Espargaro is determined to return to the track and make up for lost time.

Silverstone will be Stefan Bradl’s sixth outing on the RC213V in 2022. The German has continued to work on improving the 2022 RC213V and this will again be his focus as Bradl substitutes Marc Marquez once more. Bradl last raced in Silverstone in 2016 and claimed three top ten finishes at the British track while competing with the LCR Honda Team from 2012 to 2014.

“I have had a good break, being able to recover from the rib injuries in Germany and get back to training. Last year we had a great weekend in Silverstone and I will working hard to try and recapture that result, but there’s work to do. It’s a track which suited us last year so hopefully we can start this second part of the year better than the races before the break. It was a great break but now I am ready to get back to racing and the Repsol Honda Team.”

“We come back to racing after a good break. It has been a little bit of time since I raced at Silverstone so getting back up to speed around the track will be one of our first jobs. Then we can get into the real work of the weekend and see what is possible. It is good to be back racing, the break was nice but there is nothing like racing in MotoGP.”